IUPUI Game Recap: Video Footage of the End of the Game!

Share All sharing options for: IUPUI Game Recap: Video Footage of the End of the Game!

I have just returned from the Desert Classic, where ASU managed to sneak past the IUPUI Jaguars 59-58 in overtime. This was a truly frustrating game to watch if you were a Sun Devil fan, with numerous mistakes on both sides of the ball.

The crowd was a little underwhelming at the beginning of the game, and it was evident as the game played out that the majority of the incoming fans were there to see Arizona play Gonzaga. A lot of Arizona fans became IUPUI fans, forcing this neutral court into a road game for ASU, which is a bad situation when you are down 21-5. 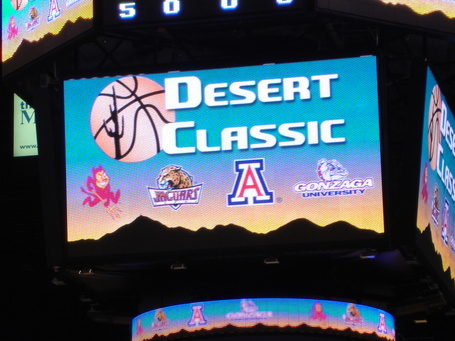 Pregame photo of the US Airways Jumbotron.

The production values of this event were very good, but the economic climate of Phoenix didn't make it appealing enough to see IUPUI play. 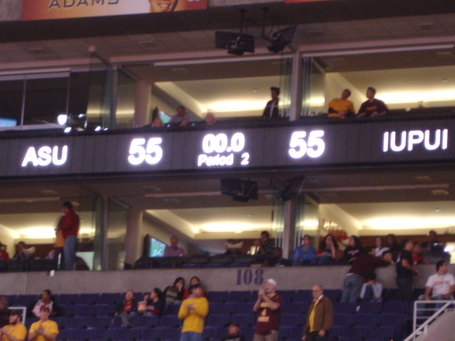 When we got off to such a slow start, it was due to the hustle of IUPUI. They wanted this win very badly, and knew this was their best chance at gaining respect in college basketball: beating a top-25 team on a "neutral" court in Phoenix, Arizona. Their desire was much greater than ASU's for the majority of the game.

Of course, it was a game where ASU decided to turn it on and, in the end, they barely pulled out a victory. This was not a game where Herb Sendek was happy. The way the game played out, I am surprised we even won the game.

Here's some video footage of the final minutes:

After this, we have a video of IUPUI's final chance to win in regulation. It was a tense moment and we are fortunate it didn't go the other way.

Now, we see ASU's final possession in overtime, up 59 to 58 and trying to sock it away. As you can see, Ty Abbott turned the ball over.

In a weird coaching decision, IUPUI waited until 3.7 seconds were left to call timeout, forcing a bad shot at the end.

All respect to the IUPUI Jaguars, because their team worked hard and played clean. But they couldn't hold off the Sun Devils for a full 45 minutes.

A lot of questions arise when looking at this game. Did Johnny Coy's transfer create a distraction over the last week or so? Did the weeklong layoff get the team a little rusty and out of sync? Does playing a team desperate for a big victory benefit ASU in any way?

The answers to all of these will become more clear as time progresses. One thing is certain, though. ASU learned that they need to bring more intensity and focus out of the gate against these teams they seem to overlook. Without aggressive play, the other team will bridge the talent gap with a hard work ethic and an overwhelming desire for victory.

We CANNOT slip into mediocrity with poor effort. Herb Sendek will fix this mess.