Already a two-sport legend in the vast state of Montana, Kalispell’s own Brock Osweiler is poised to begin his collegiate career at Arizona State, focusing his efforts on winning the open quarterback position.

With just ten days left before he graduates from Flathead High school, Osweiler will be making his way to Tempe on January 17, giving himself just two short days before classes begin on January 20, and he becomes a Sun Devil officially.

I caught up with Brock shortly after Christmas, when Kalispell was enjoying a heat wave of sorts, with weather reaching the mid-20s. He enjoys the HBO hit series Entourage and the Madden video game series.

Osweiler mentioned that both he and Matt Tucker (grade 77 from Colorado, #69 ATH in the 2009 rankings), will be arriving just in time for spring semester, giving them both an opportunity to participate in spring practice and improve their chances on making an early impact.

Originally committed to Gonzaga to play basketball, Osweiler made the big decision to instead play football at ASU on April 30, 2008. His commitment to Gonzaga was all the way back in 2006, before his sophomore year at Flathead.

We discussed this change of heart, his aspirations for the 2009 football season, his opinion of Coach Dennis Erickson, and much more.

What was your biggest moment playing for Flathead up in Montana?

The games are always exciting and physical. It was built up all week long around the state, and we went in there and beat them 21-14. It was a perfect game, with great memories. That year, in the first round of the playoffs we went back to Butte and beat them again 28-14. Those are two games that I will never forget.

How difficult was the decision to decommit from Gonzaga, and sign with ASU instead?

It was the hardest decision I have ever had to make in my life. It was something that had been on my mind for months. And when it finally came around, that week was so hard and I was in constant discussion with my parents, family, and friends. I finally decided that my best opportunity was in football.

The phone call to Gonzaga was tough, but they took it great and they have been supportive and understanding of what I had to do for my future. Gonzaga has a few power forwards graduating, and next year I could have started.

It was tough to turn down something that seemed so great, but when I looked at the upside that football had, I had to make a decision that was in my best interest.

ASU had a disappointing season, finishing 5-7. What is it about Arizona State that compelled you to commit here?

The biggest thing is to be able to work with Coach Erickson. He’s a legend in Montana, where he’s from. His record speaks for everything.

He’s won the national championship, he’s had successful seasons at every single college he’s been at, and he’s played at the Rose Bowl. To be able to play and learn from a guy with such great credentials, that excites me.

The second thing is the opportunity to compete for the starting quarterback position.

Will Brock actually be competing for the QB job this year? Has he talked to Herb Sendek about playing basketball at ASU? Continue reading!

Have you been told your status for the 2009 season? Will you be given an opportunity to compete for a spot on the depth chart, or are you going to be redshirted?

Danny [Sullivan] has the first opportunity, as he will be the senior, but obviously, Rudy [Carpenter] has been playing for four years, and nobody’s been able to prove themselves. Things are wide open, as far as I understand. The best QB needs to play, and that’s how it will be.

With basketball, I was able to since 7th and 8th grade, through AAU. I think that’s why my name as a basketball player was put on the scene so early. I think at the same time, when next year’s season comes around, I think people are going to realize some things.

Are you solely committed to football, or is there a possibility for you to be a two-sport star here at ASU? Have you been in contact with Coach Herb Sendek?

I think that playing QB at the Pac-10 level might be too much to balance with basketball. It’s something that might be a thought someday, but football is my top priority. 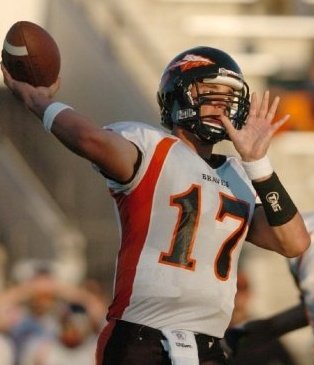 Thanks to Brock Osweiler for taking the time out of his break to talk with us. I wish him the best of luck here at ASU.