What Happened To Ty Abbott?

Share All sharing options for: What Happened To Ty Abbott?

There is a truly disconcerting trend appearing over the course of this season in regards to Ty Abbott. Statistically speaking, he average 7.3 points a game, which is down from 9.9 a game last season.  Of course, James Harden is averaging 5 points a game more than last season, so his production is seemingly unmissed. However, when we take a closer look... 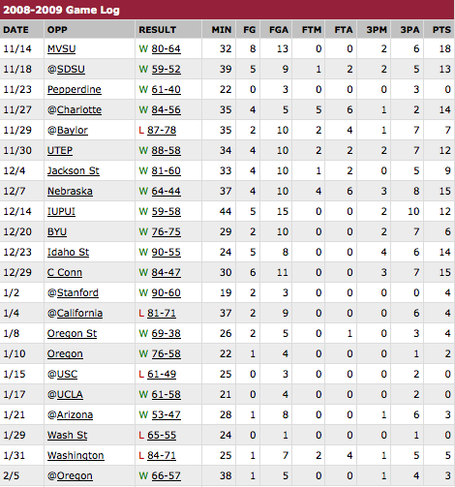 So this is very interesting. Against any opponents of quality (Pac-10 foes, BYU, Baylor) Ty Abbott's production and value drops off a cliff. This is completely at odds with last season, when Abbott dropped 25 and 30 on California, 19 on Xavier, and 18 on Oregon State. He was very inconsistent, but his value was far more than it is in 2008-2009. What is to blame for this regression?

First of all, the emergence of Rihards Kuksiks. His minutes went from 17 per game last season to 31 this year, and his points per game went from 5 to 10. The offense is being run through Harden, Jeff Pendergraph, and Kuksiks, with Derek Glasser distributing the ball. Abbott isn't being utilized, and his confidence is shaken.

Finally, he's still a young man who has to live in the shadow of James Harden. Harden plays with a maturity that most players just don't have, and Abbott may find the pressure to perform deflating. There is no correct answer to this question, and only Ty himself knows the truth.

But I expect more from  Abbott when he plays 38 minutes against Oregon. 3 points, 4 rebounds, and 2 assists is a line you'd expect from Jerren Shipp after playing 15 minutes. Give us more, Abbott, or sit on the bench.