Pac-10 Postseason Bubble: Who is Going to the Dance?

Share All sharing options for: Pac-10 Postseason Bubble: Who is Going to the Dance?

Alright, lets look at the conference standings for the Pac-10. From this, we will determine who is playing in the NCAA tournament, the NIT, and the CBI. Finally, we will wish the Oregon Ducks a good summer.

This article features pictures taken by Nick Trahan at the Pac-10 Tournament. He was kind enough to fill in and snap some great shots for House Of Sparky. Thanks again, Nick. 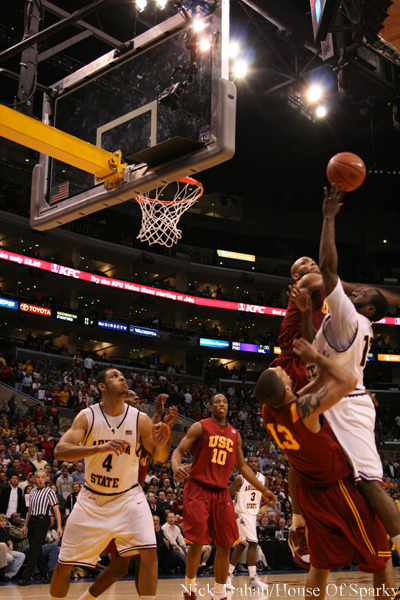 Harden's last layup against USC; was he fouled? You decide.

The Trojans finished the regular season in sixth place, losing the tiebreaker to Arizona. Instead of rolling over and packing their bags for the NIT, USC went on a great run in the Pac-10 tournament, beating California, UCLA and ASU to lock up an automatic bid to the NCAA Tournament. 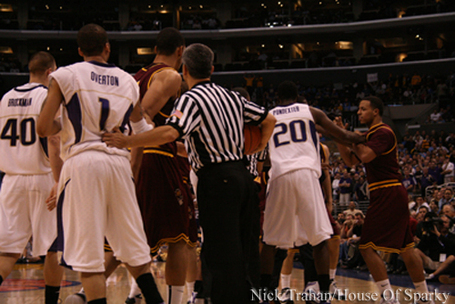 Regular season champions, the Huskies went 25-8 and are going to be a 4 or a 5 seed in the dance. Led by a freshman (Isaiah Thomas, the Huskies are ready to make some noise.

A team that has underperformed this year, UCLA gets into the tournament on the strength of its schedule and its 25-8 record. 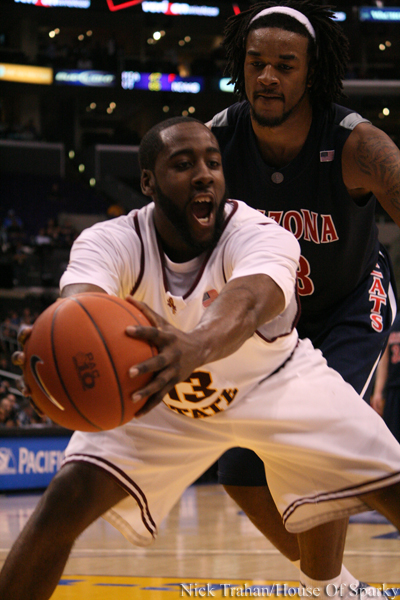 Our team almost won the Pac-10 Tournament yesterday, being humbled by a second half run that decimated our confidence. Beating Washington and Arizona the previous days has ensured a good spot in the tournament.

Since ASU is hosting the sweet sixteen and the elite eight in Glendale for the West Regional, we will be in one of the other three brackets. 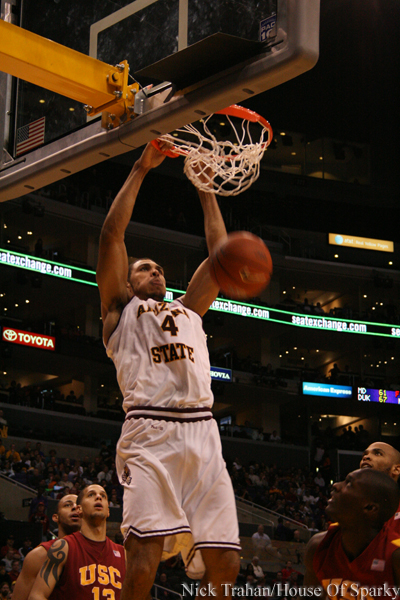 Looking for more of this come Thursday or Friday.

I know they are seemingly ensured an at-large bid, but I think we can make a case against such a guarantee. Their best wins were Washington (2), ASU, and the all-important season sweep of Arizona. I am sure they will get in, but a 22-10 record isn't good for much higher than a 7 seed.

Who's on the bubble?

Keep reading to find out the truth about the bottom half of the Pac-10...

Frankly, I think their bubble has burst, especially considering USC won the automatic bid from our conference. Either way, I thought the Pac-10 would get 5 bids this season, whether it was Arizona or USC.

Arizona has some very impressive wins, including Kansas, Gonzaga (neutral court), Washington, and UCLA. They ended the season with a whimper rather than a roar, and I think that does them in. 24 seasons in a row in the big dance, but the time has come.

Who is going to the NIT?

The NIT is a fun event, giving teams a chance to play for something long after all hope was lost for the NCAA Tournament. ASU gave us 3 games in the NIT last year, almost making it to Madison Square Garden before getting stopped by Florida.

WSU really improved their resume in the last few weeks of the season, beating Arizona, UCLA, and ASU. Those wins alone are good enough to get them into the NIT.

Not an impressive Pac-10 season, but they have 18 wins and are a sleeper team for the NIT.

Who is going to the CBI?

13-17, not very good. but they might want a Pac-10 representative in the CBI. At least, I hope they do for the Beavers' sake.

Who is going home?

Hey, at least you got a two wins in the Pac-10. That was good to see. And the good news is, you have a baseball team again!