So I'm well aware that there are a lot of ways to pick your brackets during March Madness. Advancing all four of the No. 1 seeded teams to the Final Four was a bad idea, until a few years ago when it happened for the first time in tournament history. Putting a mid-major in the Final Four? Is that a bad idea? Just ask the George Mason Patriots or the Butler Bulldogs.

So why not use mascots to determine your NCAA tournament champion? Women across America have used this tactic for years (and years). Golden Bears, Huskies, and Bruins have been plaguing these brackets, while teams with Spiders, Grizzlies, or Trojans as mascots get bounced immediately.

I've decided to put together a bracket based on this mascot theory. I will definitely explain my questionable decisions, so please bare with me.

The hardest part about mascot picking? You run into a lot of Tigers, Wildcats, and even a few revolutionary war heroes. How can anyone determine cuteness factor? Well, you need to actually look at the mascots themselves.

For example, in a battle between Clemson and Princeton, who are both Tigers, you need to assess a few things: first, do women think a paw print is a cute logo? Not really; they prefer actually furry cat faces. That's why Princeton outmanned Clemson in the second round of my tournament bracket.

I had some very tough decisions to make as the bracket reached the Sweet 16. Could a 16 seed, the Boston University Terriers, defy all the odds and make it to the Elite 8? Unfortunately for them, the Louisville Cardinals came on too strong with their majestic red feathers, and women across the world swooned.

Other tough picks: The Marquette Golden Eagles upsetting the Washington Huskies in Sweet 16 action. Both schools have great mascots, but the quality use of an adjective in the mascot title gave the edge to the Big East squad out of Wisconsin. Check out my full NCAA Basketball Tournament Mascot Bracket 2011 here, or look at the image below: 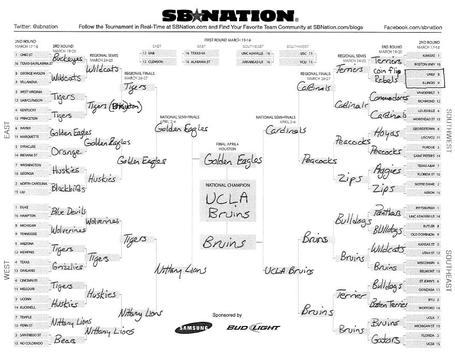 A few other observations below: 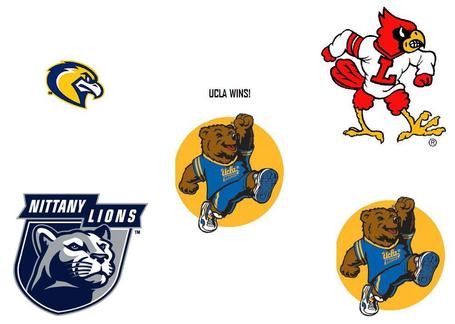 Final note: I'm very aware that this is stupid, and I welcome all criticism. I've been told Louisville is very overrated in my bracket. Bring it on, mascot fans!