I'm not sure about you guys, but I'm pretty excited about college football. We've officially hit summertime in Phoenix, with temperatures getting over 110 on a consistent basis. What else is there to do but stay inside and dream of the gridiron?

With that said, we're going to start an 2011 opponent preview series, where we find out how Sun Devils' opposition did in 2010, who their key player is, and what the chances are that they will defeat ASU.

We start off logically with the first game of the season, a barnburner with UC Davis scheduled for September 1 (yes, a Thursday) at 7:00 PM local time.

The Aggies went 6-5 in 2010 as a member of the Great West Conference. At the conclusion of the 2011 season, they will realign into the Big Sky Conference, a big upgrade in terms of visibility (in the FCS, the Big Sky is a top-notch place to play). 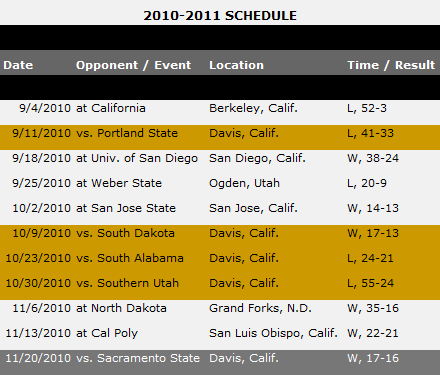 Their most impressive victory came on October 2, when they were able to defeat FBS team San Jose State on the road, 14-13. Sure, the Spartans went 1-11 last season, but UC Davis is no slouch.

Key player: Randy Wright, QB. As a redshirt freshman in 2010, Wright was surprisingly effective. He threw for 2,432 yards, 17 touchdowns and only eight interceptions. While UC Davis didn't have a good running game (in 11 games, their net total yardage was 878), they were still able to score because of Wright. His favorite target was senior Sean Creadick, but he has since exhausted his eligibility. It will be interesting to see who Wright begins to favor in 2011.

Odds: The Sun Devils are more talented and will have a home-field advantage in the heat of the summer. There's almost no chance that the Aggies will pull off an upset, and fans should expect more of a California-like result (52-3 win) than a San Jose State disaster.