This is the second installment of the 2011 ASU football opponent preview. For our UC Davis preview, go here.

The Missouri Tigers represent a huge challenge for the ASU Sun Devils, a Big 12 team coming off a 10-3 season and a high-octane bowl battle with the Iowa Hawkeyes.

Fortunately, Missouri has lost a lot of talent in the offseason, with the most glaring loss being starting quarterback Blaine Gabbert, who was drafted tenth overall in the 2011 NFL Draft by the Jacksonville Jaguars.

Replacing Gabbert will be no easy task for sophomore James Franklin, who until 2011 has been used mainly as a wildcat formation threat. He picked up 116 yards and two touchdowns in 2010 while completing 11 of his 14 passing attempts.

Franklin is a big, mobile quarterback that can cause real trouble for defensive coordinators. With a tough schedule in 2011 (games against Texas, Oklahoma, OK State, Texas A&M), the Tigers are still hopeful that they can put up a fight in the Big 12. 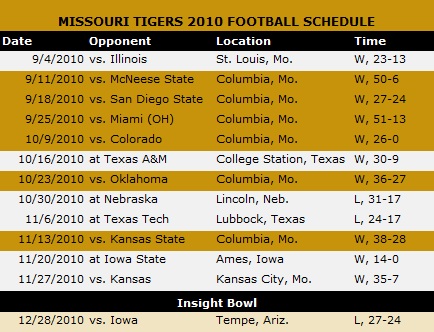 As you can see, the Tigers were consistent at home, going undefeated in Columbia. They faltered against a great team in Nebraska and suffered a shocking setback against the Red Raiders.

Missouri was in line to represent the Big 12 North in the Big 12 Championship Game until they lost to Tech. After that, they had no chance of going to a top tier bowl and were relegated to the Insight Bowl at Sun Devil Stadium.

I watched Missouri's incredible offense go back and forth with Iowa and I must say there are still a lot of weapons for Franklin and the Tigers to use in 2011. Wes Kemp, T.J. Moe and Jerrell Jackson all were significant contributors in the wide receiver slots last year and will help ease Franklin into his starting role.

The Sun Devils secondary will have their hands full with Moe, a sneaky-good wideout with hands of gold. He is reminiscent of Chris McGaha, only more seasoned and an surprising big-play threat.

Odds: Man, this is tough. I think you have to go with the Sun Devils due to the home-field advantage and the slightly more experienced quarterback in Brock Osweiler. But really? this could be a tossup if Franklin performs well under pressure. ASU wins in a close one.