The Dominating Case of William Sutton

Share All sharing options for: The Dominating Case of William Sutton

Anyone who truly knows football, understands that certain positions on the field are known to be the most difficult to play, for a variety of reasons.

For instance, from a mental standpoint, the quarterback position is incredibly challenging given the responsibilities that fall into the lap of a signal caller. Quarterbacks are required to manage the game, read defenses, and they hold the only position on the field where a fan of any level of football knowledge can easily recognize their mistakes and miscues. Cornerbacks and offensive tackles have very difficult jobs athletically, considering the fact that they are on what us football people like to call an "island". Isolated and alone, they are expected to get their job done. Receivers and defensive ends have become the true athletic "phenoms" of today's game. Imagine trying to contain such athletes while back pedaling. Doesn't sound like the mellowest walk in the park, does it?

(Forewarning, some may say what I'm about to delve into could be considered bias, but I don't care.)

The toughest position to play in football, from a physical standpoint, is defensive tackle. Defense is already known to be the more tiring side of the ball, due to the task of reacting. Think about the philosophy of no-huddle offenses. It's never the offense which is at the disadvantage when it comes to fatigue; the defense is always the side of the ball staging minor ankle twists and elbow strains in hopes that the officials will provide an injury timeout so that everyone on D can get a quick breather.

Defensive tackles are the heaviest guys on their side of the ball, so fatigue is already an issue. On top of that, a defense tackle takes on the thankless job of trying to establish the line of scrimmage, play in and play out. They take on double teams, which equates to around 600 pounds of man trying their absolute best to demolish them.

Although playing such a position can be thankless, it is also invaluable. Winning the battle up front has and always will be the most fundamental and important aspect of a football game. So, it's needless to say that having a solid defensive tackle unit is critical to the success of a football team. Luckily for Arizona State, they have arguably the best defensive tackle in the country, and that is in no way an overstatement.

Those are Will Sutton's statistics through five games, and they are simply outrageous numbers. To put this in perspective, I totaled 35 tackles, 7.5 for loss and two sacks last season, which garnered me enough All-Pac-12 votes to earn Honorable Mention. That was through 12 weeks...you do the math.

Will is playing like an All-American right now, let alone All-Conference. Sun Devil coach Todd Graham said earlier this week that Sutton is on pace to be an All-American, and I witnessed PAC-12 football analyst Rick Neuheisel call him the best defensive player in the conference first hand last weekend. That's pretty high praise from two individuals whose job descriptions include evaluating football talent.

I happen to know Will very well. He was my teammate for three years, and more importantly, has remained a good friend of mine. I was equally as excited to write this piece about him as he was to give me the opportunity to do so. Those of you who have kept up with my blog and work on House of Sparky are aware that I enjoy writing because it gives me the opportunity to tell stories. Well, here's another one:

June of 2009. I'm entering the bubble along with my fellow returning teammates to partake in the first afternoon of summer workouts. That first workout is always nerve-racking; half of the reason for this is the anticipation of how one's body will react to an intense workout after having been off for a month. Essentially, the question you ask yourself on the way to that workout is "Am I going to survive?"

The other half of the reason for it being nerve-racking is the fact that the newcomers will be present. There is always an early onset case of competitiveness when it's time to come face to face with people who could potentially push you for a significant spot on the depth chart come August. I knew I would have my hands full with dear friend and five-star recruit Corey Adams.

But the other kid I knew less about, and quite honestly, had never heard of. He quickly earned the nickname Bone Crusher, after the briefly popular hip-hop artist of the early 2000's. This was due to his hairstyle, which was somewhere between the dreadlocks which he rocks today, and a very large afro. But that's not the only way the nickname fit Will. You could tell, from the first time he lined up, that Will Sutton possessed the type of explosiveness and capability to literally crush bones. Naturally, I knew I would have my hands full in trying play a significant role the upcoming season. 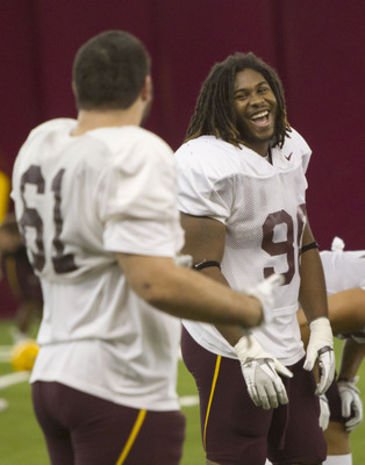 Playing extensively his freshman year and even starting a couple games, it was clear that Will would be a mainstay at the defensive tackle position for the remainder of his career. A lot of people don't know this, but before redshirting the 2010 season due to ineligibility, Sutton was actually in high contention for Lawrence Guy's starting spot. He had dominated camp, was in the best shape of his life, and was literally unstoppable in 1-on-1 pass rushing situations.

I remember entering the spring of 2011, and how noticeably eager Will was to get back on to the field. Despite not playing in a game the year before, he was listed as a starter from the first time we entered meetings for spring football. He and I formed quite the duo, earning us the nickname of "Salt n' Peppa", and just to put a spin on things, he would be Salt, and I would be Peppa, nicknames of which we still affectionately refer to each other today.

Will had a tremendous season in 2011, starting in every game but one, which was due to a minor foot injury. He tallied 33 tackles, five for loss and 2.5 sacks, numbers which he has already trumped through five games this season.

Why such a breakout year? Well, it's clear that Will has finally been able to tap into his unlimited potential. I called him the other day to chop it up about life, and of course, football. I conducted a short interview with him because I wanted to provide Sun Devil fans with solid insight into his mind-state and development as a football player. And on top of that, I was curious.

Here is the interview:

Q: To what/who do you attribute your success this year?

A: What it is, is that I'm maturing, and I've been working harder than I ever have. It has a lot to do with how the season went last year and what we as a team are trying to accomplish.

Q: Who has been your biggest influence throughout your career at ASU?

A: My biggest influence so far has been my family and friends. Everyone wants to see me do great things, and I want the same.

Q: What would you say to the casual football fan who wouldn't think that a DT could be a star? In other words, defend the value of your position.

Q: What do you attribute your intensity to, and what keeps you motivated to continue to work on your craft at practice week in and week out?

A: I would have to say my love for this game.

Q: What about Coach Graham has led you and the team to play more cohesively this year?

A: He came in telling us that things were going to change and he created a system that best fit us. He's big on discipline and he's also big on family. He has us playing like a team and not a bunch of individuals.

Q: What motivates you to provide unmatched energy play in and play out?

A: What motivates me to bring energy every play is knowing that I want to make as many as I can, so when I make one, I get hype.

A: It's between Oregon, and Utah last season, and also Georgia my freshman year.

I should apologize for taking a mini-hiatus from writing my column. That hiatus is partially due to the workload we've had at the PAC-12 Studios over the last few weeks in trying to properly display the immense amount of football action that's been taking place throughout the conference. The other reason for my recent absence from House of Sparky has been due to the fact that I wanted to write something a little more personal, and get motivated to try and come up with a piece that can be thoroughly enjoyed by Sun Devil fans, as opposed to just jotting about game previews and recaps. It's my goal to provide real and qualified insight into the world of college football, a game in which I am obviously very passionate about.