ASU Football: Is It Ever OK to Root For UofA? Maybe This Weekend

Please forgive us, Sparky, but this is for your own good. Trust us. Or maybe not.

Share All sharing options for: ASU Football: Is It Ever OK to Root For UofA? Maybe This Weekend

Yes, it's blasphemy. No question about it. The very notion is repulsive to any Sun Devil all the way down to a cellular level.

NEVER root for the Arizona Wildcats.

But how solid is "never"? What if a Wildcats' victory can actually help the Sun Devils? Does the benefit to the maroon-and-gold offset the natural hatred?

A situation where those questions can conceivably be asked presents itself this weekend.

The USC Trojans, ASU's top competition for the Pac-12 South division title, are heading down to Tucson to face the Wildcats. Arizona ended a three-game skid with a huge 52-17 win over Washington last weekend, and boast a powerful offense. USC has been good but not great this year, and are "just" seven-point favorites. Can an upset be brewing?

Should both Arizona teams win, the Sun Devils would have a one-game cushion in the division. Should just the Wildcats win...let's just call it "insurance", as ASU would still remain in a tie—albeit a three-way one—atop the South.

So let's examine both sides of the coin here.

Why You Should Root for the Wildcats This Weekend

Let's take a look at the standings heading into Week 9: 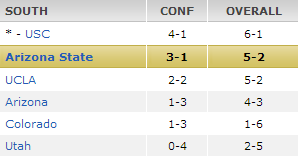 Even after the loss to Oregon, Arizona State still is tied for the division lead with USC, but in the South race, the 10th-ranked Trojans are still the favorite. While their play has not reached the dominant level many expected so far this season, they are still loaded with as much talent as any team in the nation.

The Sun Devils' schedule is quite tough down the stretch, and as such, getting help will be a necessity in order to capture the South crown.

After hosting UCLA, ASU travels to Corvallis to take on a seventh-ranked Oregon State squad that will have quarterback Sean Mannion back. They then face a huge battle on the road against USC, before returning home against Washington State and then heading down to Tucson for the Duel in the Desert to end the regular season.

Even the most ardent Sun Devil supporter must realize that the odds of ASU finishing the season without another loss are slim. As it stands now, their margin for error is almost non-existent.

As such, ASU fans must root for UofA this week...then Oregon, UCLA and Notre Dame. This race could, and likely will, go down to the wire.

Why You Should Not Root for the Wildcats This Weekend

But to take a little more objective look, why does ASU need the help this early? With this Saturday's game and the battle at USC in two week, the Sun Devils still control their own destiny. Win out, and they are off to Autzen for the Pac-12 Championship game. No Sun Devil wants the stain of a Wildcat assist on their crown!

On the Trojan side of things, they still have games against No. 2 Oregon and UCLA on the road on either side of their game against ASU. A Trojan slip up during their homestretch could very well be on the horizon.

So where do you stand? Can a situation ever exist—whether it's this weekend or not—where Sun Devil Nation hopes for a Wildcat victory in order to help their own cause?

Let us know in the poll and comment section below.