Sorry Paul, Number 42 Belongs To Us All

Paul Calvisi doesn't like that Alden Darby, or any Devil, wears No. 42 in practice. He think that only belongs to Pat Tillman. He's wrong. It belongs to us all.

Share All sharing options for: Sorry Paul, Number 42 Belongs To Us All

Hey Paulie Pitchfork, I just read your recent article Sorry ASU, but number 42 belongs to Pat Tillman and no one else. In it, you take a major issue with Todd Graham's decision to honor a deserving player, in this case safety Alden Darby, by allowing him to wear a camouflage Pat Tillman jersey during practice.

First off, I'll start with the points you make that I wholeheartedly agree with, such as:

Never before and never again will there be a Pat Tillman. He was singular, not plural. If anyone ever should've worn #1, it was the one and only Pat Tillman.

Tillman's life went way beyond the gridiron and the college experience. In fact, Pat conducted himself in such a way that it made the rest of us examine the manner in which we were leading our own lives.

But other than that, I have to take issue with you taking issue. You think that Pat's career, service and legacy has made the number 42 "the sole property of Pat Tillman the moment he lost his life as an Army Ranger."

It's actually the other way around, Paul.

That was the moment it became the property of not just an amazing human being, his football team or his school. It became an ideal, a way of life, and a mindset. Those elements aren't property. Those are things to be cherished, revered and above all, shared with others.

Simply put, number 42 belongs to us all.

Look, I get the general direction of what you're trying to say.

Yes, Pat Tillman was a once-in-a-lifetime individual. His impact on the field was incredible, but the legacy he left behind to us all topped that a thousand-fold. Pat set the standard that all not just all current and future Sun Devils should strive to achieve, but every American, just like you said:

In fact, Pat conducted himself in such a way that it made the rest of us examine the manner in which we were leading our own lives.

Part of that legacy is the number 42. It's as close to a holy artifact as there is for Sun Devil Nation. And that's exactly why it should not be placed under glass and kept at a distance behind a maroon-and-gold velvet rope.

It should be celebrated. It should be at the forefront of the program at all times (as Graham has done in many ways). There's no way that 42 and what it represents can be honored too much by Arizona State.

Number 42 is ASU football. Number 42 is the Sun Devil ideal. Pat Tillman immortalized it with his actions, but those same actions gave that number and all that it represents to US, to every member—past, present and future—of Sun Devil Nation.

Later in your piece, you make a suggestion as for an alternative:

In this case, it should pay off...with perhaps a PT42 patch on a jersey. Or a PT42 sticker on a helmet. Yes that feels right, more befitting the moment.

Well...ASU has been doing the PT42 patch for years and now includes stickers on many of their helmets. 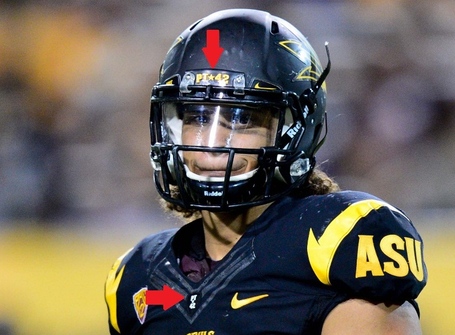 You also state that you feel giving a player such an honor does them a disservice.

Moreover, putting any sort of Tillman jersey on an ASU player simply isn't fair -- to the player. No matter how deserving and humbled he might be.

If someone told me that I embodied even a fraction of the qualities that Pat had, it would indeed be about the most humbling experience of my life. But I'd also know that I'm doing something right, and that I'm the type of person that can serve as an example for others to follow.

Coach Graham feels that Darby has earned that right, and dammit, good for him. Darby has been a very good player and a great leader for this Sun Devil team, on and off the field. If ASU or any school around the nation had a team full of Darbys, they'd be unstoppable.

No one is thinking that by having a player deemed deserving wear the 42 in practice would demean or besmirch the legacy of Pat in any regard. They also aren't expecting that anyone who does don the number to be exactly the person or player Pat was. Again, it's representative of the ideal that every person should strive for, and that's a great and wonderful thing.

I don't want to sound like I'm blowing up a practice football jersey into some kind of philosophical issue, but certain things carry with them extra weight that may not be obvious to all. Pat Tillman and the number 42 have that effect with ASU and the fanbase.

We should all aspire to be worthy of wearing a 42 on our back and celebrate the pursuit of everyone doing so. We should share it with our fellow members of Sun Devil Nation and the world at large (yes, even those in Tucson).

Being a great teammate, citizen, player, friend and human being is what 42 is all about. The moment that we think those traits are the "sole property" of some and not all, we all fail.