The Pac-12 South: What The Hell Is Going On Here?

Another weekend, another topsy-turvy landscape in the Pac-12 South. Just what is going on with the division?

Share All sharing options for: The Pac-12 South: What The Hell Is Going On Here?

Back in August, this was not what anyone expected to see come October 7th. 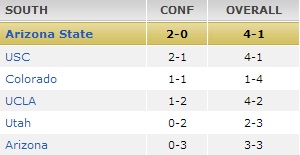 Yet here we are. The Sun Devils are alone at the top of the South, with USC hot on their heels. About the only thing about those standings that resembles any preseason expectation is Arizona at the bottom (burn). This week's games continued the season-long trend of the unexpected.

The Wildcats were poised to move out of the cellar when the had a 14-point lead midway through the fourth quarter on the road against Stanford. However, the magic of Josh Nunes led to another wrenching UofA defeat. UCLA, coming in ranked No. 25, took on 1-4 Cal, but Zach Maynard apparently made a deal with the devil as he threw for 295 yards and four touchdowns in a 43-17 rout of the Bruins. Back on Thursday, Utah jumped out to a 14-point lead against USC, but the Trojans roared back to defeat the trendy preseason pick. ASU and Colorado were idle in advance of their game on Thursday.

So what was six weeks ago looking like USC's clear path to a South title and Matt Barkley's Heisman coronation tour is now very muddled but very interesting. There is still a lot of football to play, as most of the division has played just five games, with only Arizona and UCLA have played six games.

So where does everyone stand at this point?

Just like last season, the Sun Devils control their own destiny. Can they close the deal? Running the table seems unlikely, given a brutal back half of the schedule, so they will need some help. After this week's trip to Colorado, ASU will face four straight teams who entered this weekend ranked—Oregon (No. 2), UCLA (No. 25 and will drop out), at Oregon State (No. 14) and at USC (No. 13). Brutal. A split of those four games would constitute a success, which means that ASU would need either a win over USC or for the Trojans to drop another game to stay on top.

At this point, the Trojans still must be considered the favorites. They are clearly the most talented team in the division, and their schedule lays out very well. Their three toughest games—Oregon, Notre Dame and ASU—are all at home. While they have those two factors in their favor, the Trojans have not shown to be the dominant force they were expected to be. Can the all-world talent of Matt Barkley, Marqise Lee and company overcome USC's intangible question marks? Probably, but their margin for error will be slim.

The Buffaloes are currently tied with USC with just a single conference loss, can make a run with...hahaha, no, nevermind. I can't even make an argument for them having any chance outside of a series of bus crashes by their opponents.

The Bruins were dealt a serious blow by their embarrassing loss to Cal. That put them in the position of needing to nearly run the table to have a chance at the South crown. They catch a break with not having to face Oregon, but they have to travel to ASU, and they end the season with home games against USC and Stanford. Their hot start and the great play by the offense hints at better seasons ahead for the Bruins, but they seem now to be coming back down to earth in 2012. Nevertheless, while they will be hard pressed to repeat as "South champions", they should get to a decent bowl game.

The darkhorse offseason sweethearts are finding everyday life in the Pac-12 to be a little more difficult than in the Mountain West. Their defense has been underwhelming, and the offense has been quite bad. Their schedule lacks any big name opponents, but will prove tough, with road dates against UCLA, Oregon State and Washington. Their goal will no longer be the division, but simply making a 10th straight bowl appearance.

Done. With three conference losses and USC, ASU and road trips to Utah and UCLA still to go, they have no realistic shot at the crown but can make a run at a bowl.