While he scores most of the goals, Kale Dolinski also leads the team in grit. That combination has powered ASU to a perfect 18-0-0 record and the No. 1 ranking in the ACHA.

Like many Canadians, Kale Dolinski first skated onto the hockey rink at an early age, although the success that has come to define him was not yet there.

"At about five or six I hit the ice," Arizona State's junior forward said. "I definitely matured as a hockey player. I was terrible when I was younger."

Another missing element was a love for the sport, which took nearly a decade to come around.

"I got cut from Tier 1, and the following year I tried out for Triple-A. I made the team and I fell in love ever since. I really took a passion for it. That's when I started to devote myself to hockey. I was in high school at the time, so I was about 15 at the time when I was like 'OK, I'm going to make at least somewhat of a lifestyle about it.'"

While many players who eventually become stars develop a polished offensive game, those early struggles helped to instill in Dolinski a gritty, tenacious approach to the game that has come to define him as a player. In turn, he modeled his style after similar players, such as Detroit Red Wing Darren Helm, and grew to fit that role.

"I just like people that are relentless. I remember watching the Stanley Cup playoffs and watching Helm play on the penalty kill. His perseverance to get to the puck was just tremendous. They don't have to be an All-Star, but I like anyone that just brings it every game."

For the past two seasons, Dolinski has brought that same high-energy approach to the Sun Devils and emerged as one of the top players on one of the nation's premier programs.

Last season—his first in Tempe—Dolinski led the team in assists (25) and power play goals (nine), while tying Dan Styrna for the team lead with 46 points. This year, he is once again tied for the team lead in points with 32, and his team-high 19 goals are currently the fifth highest total in the ACHA.

However, his Sun Devil success was a long time in the making.

He began his collegiate career in his native Canada, but injuries and an uneasy off-ice situation forced a change.

"I first went to Montreal, to McGill, an Ivy League school," Dolinski recalls. "I joined the team, but had some injury trouble. I had two sports hernias. It was also a French-English team, so it was very segregated. I couldn't tackle that burden so I left."

He decided to join his sister at Minot State in North Dakota, but there was still a lot of unease present.

"I was really worried," Dolinski said. "I wasn't sure I was going to make the team. I didn't know what to expect, and I'd never even heard of that league before."

Those fears, and any need for prior knowledge of the league, was immediately rendered unnecessary. Dolinski lead the team with 33 goals and 44 assists and earned the ACHA's prestigious Division 1 Rookie of the Year award.

In the midst of that success, a late season road trip to the Grand Canyon state proved to be the catalyst that would help change his life and the direction of the Sun Devil hockey program. After two games in Tucson against the Wildcats left him unimpressed, the next leg of the road trip to Tempe put things into a more positive light.

"The campus was nice. The city was nice. It's upbeat and just fits my lifestyle," said Dolinski. "I hated the winter (in North Dakota). I probably had more snow days than school. Walking to school in six feet of snow was troublesome. After I played ASU, I said 'I'm done.'"

Dolinski then contacted Arizona State head coach Greg Powers, telling him, "‘I've already transferred, I'm not sure if you want to take me. I played against you, I'd be happy to try out.'" 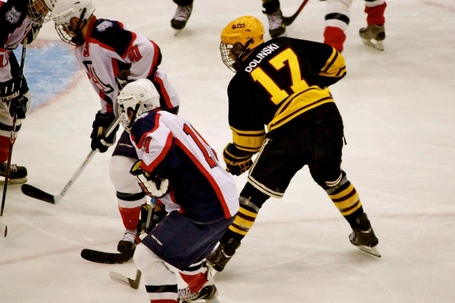 Powers and the Sun Devils were happy to take him, and Dolinski's play has been a primary reason for the team's dominance. This year, the Sun Devils are the only remaining undefeated team in the ACHA at 18-0-0. Despite having several talented veterans such as himself on the roster, what does Dolinski believe is the primary reason for the perfect record?

"Definitely the recruitment. We have some outstanding players," said Dolinski of the team's newcomers. "From the defense up to the forwards. We got Brian McGinty, who is now on my line, who's a tremendous hockey player. Then you have Stephen Collins, who is a wizard with the puck. Then you have Jordy (freshman defenseman Jordan Young) on the point. You have (Brett) Blomgren. They're amazing pickups. That's huge."

Another factor that has had a positive impact for the team has been in improvement in their overall mental toughness and resiliency, which was put to the test early in the year in their first road trip.

"The biggest turning point was probably against Iowa State," said Dolinski of ASU's 4-3 win over the then-No. 11 Cyclones. "We were down 3-0 and we came back. That was a huge, huge obstacle for the team to overcome."

It also helped to get a large and persistent monkey off of his back, which he and the Sun Devils did on November 8th of this year.

"The next biggest step was Oakland. I've had terrible luck against them, losing to them in Nationals with Minot, to Nationals with ASU the following year, to this year. I was pretty worried when we came to that shootout. Even though it was a close game, I felt like we did outwork them and we did deserve the win, but it was mentally and physically draining. It was an emotional game. It was a huge rollercoaster, but one that we overcame. I think we never looked back."

With the team's continued success and talent level, one of ASU's biggest challenges has been finding ice time for everyone, as well as the best combination of players.

"Finding those chemistry and combinations is really difficult," Dolinski said. "It's unfortunate that Liam (Norris) went down, but McGinty stepped into his place. Hecks is a one of a kind hockey player. The beauty of playing with him is that you don't really need to do much. You just give him the puck and he just goes. He's got the size and strength to really do it on his own. Any players that you put with him are going to complement him well. Mainly, it's just trying to find the right combination. Right now, things seem to be working, but it's a long season and it can all change."

One of those factors working very well is Dolinski's current line, in which all three forwards share that same gritty approach.

"McGinty and Danny (McAuliffe) have the same kind of game play as me. We're working hard. We're never going to score the pretty goals, but every goal counts, right?"

That line and the rest of the squad will be facing the stiffest challenge of the season so far this weekend, as the Sun Devils will be traveling to face Penn State. The Nittany Lions are now in their first season at the NCAA Division I level after moving up from a run in the ACHA that included five national championships, but Dolinski believes the Sun Devils can be more than just competitive.

"Intimidation is a huge factor. We can't think that they're better than us," said Dolinski. "They're just another team. Yeah, they're well coached and they play a few levels up, but there's no reason that we can't keep up with them and play to the same level as them. We need to be defensively sound. Obviously, they're very offensively talented. We need to stay out of the box too. That's going to be huge."

Regardless of the outcome in Happy Valley against an NCAA Division I opponent, Dolinski's Devils will be among the favorites to take home a national championship at season's end...provided their timing is right.

"I don't think any goal is unattainable. It's definitely going to be a struggle. As soon as you go to Nationals, everyone has a clean slate. Look at Oakland last year. They were a good team, but they were nowhere near the top five. If you can come into it playing your best hockey, you're going to have your best chance at winning."

But Dolinski is not yet worrying about Nationals or the future. Staying true to his gritty core, the next task is the only one that matters.

"We got to put last year's feeling aside, and take it one step at a time. One game at a time."

"You don't have to worry about my special move, I'm terrible on breakaways. I'd probably shoot, actually. I'd be too scared if I did a deke that I'd juggle the puck and it'd go into the corner. I'd definitely shoot. Where I'd shoot, I probably don't know. My roommate Joe says five hole and it seems to be an easier target to hit, but I like to go high glove for some reason."