On Sunday, Arizona State will learn where it will be heading for the 26th bowl game in program history.

Earlier this week, we took a look back at the school's first ever postseason trip, a thrilling 0-0 tie in the 1940 Sun Bowl. We know continue our look back at the Sun Devils' (and Bulldogs') bowl history with their second trip to a familiar location.

After coming up with a distasteful tie in their first bowl outing, Arizona State Teacher's College head coach Dixie Howell was determined to get the Bulldogs back to the postseason. The team was led once again by the defense, which was once again stout, allowing just 74 points over 10 games. That helped the team to a 7-1-2 record, and the good folks at the Sun Bowl were impressed enough to have ASTC back once again.

This time, the Bulldog's New Year's Day opponent was Case Western Reserve, who these days compete at the Division III level. Back then, the Spartans were a quality team and would give the 'Dogs all they could handle.

In front of an estimated 12,000 fans, the Spartans got on the board first thanks to a Steve Belichick one-yard touchdown run, and it being the 1940s, Belichick then kicked the extra point for a 7-0 lead.

The Bulldogs came back in the second quarter, first on a touchdown pass from Joe Hernandez to Wayne Pitts, but the extra point was no good. That was merely prelude to history, as ASTC's Hascall Henshaw then ripped off a dazzling 94-yard touchdown run to double the Bulldog lead. Henshaw's run would stand as the program's longest play from scrimmage for 28 years until Art Malone's 97-yard run in 1968, and it still ranks as the sixth-longest play in school history.

Arizona State took that 13-7 lead into halftime, but sadly, the second half was not kind to the Bulldogs.

The awesomely named Willis Waggle returned a block Bulldog kick 10 yards to tie the game in the third quarter's only score. In the fourth quarter, Case Western Reserve's Richard Booth and Joe Reis each scored on short runs to seal the Spartans' 26-13 victory. 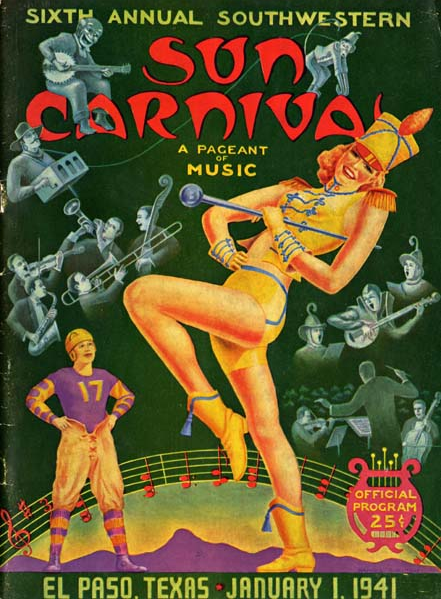 Game Program from the 1941 Sun Bowl