The Sun Devils are ranked No. 1 in the ACHA, and a big reason why is the stellar play of their goaltender, Joe D'Elia

Some hockey players opt to become goaltenders because of the immense importance of the position. Others do so due to team need, while some just love the challenge of stopping 90 mph slapshots.

But not Arizona State goaltender Joe D'Elia. His path to the pipes was a tad more stylish.

"I loved the equipment. That's what drew me to it," he says of becoming a goalie. "Especially the helmet. Having a painted goalie helmet was something I always wanted."

D'Elia, in his first full season with the Sun Devils, now has that painted mask, which looks even better along with his 9-0-0 record and 1.98 goals against average. His strong play has been a major factor in ASU being currently ranked No.1 in the ACHA standings, and in a prime spot to capture a national championship.

His journey to Tempe began in his native Ontario. Being from such a hockey crazed region, he predictably found his way to the rink at an early age.

"My parents put me into hockey when I was five and I've played it ever since. They knew I had a pretty big passion for it. Every Saturday night I used to watch hockey, and that's how I got into it."

He grew up idolizing the goaltending of several greats, including the legendaray Patrick Roy, and being a fan of the Montreal Canadiens, their run of netminders including Jose Theodore.

Modeling his style of play after those greats, he soon found his way to Davenport University, where he found immediate success. As a freshman during the 2010-2011 season, he helped lead the Panthers to an ACHA national championship.

"For what it was, it was a great experience. Things didn't go as well the second year, but that first year I wouldn't trade for the world," D'Elia recalls. "Winning a national championship was unbelievable. A lot of guys don't come close to doing that in their four years, but for me to do that in my freshman year was pretty special."

During that sophomore season, D'Elia felt the need for a change. A recent brush with the up-and-coming Sun Devil program helped convince him to take what he called a "shot in the dark" and explore ASU as an option.

"Right before I contacted Coach (Greg) Powers, they actually played us when I was at Davenport," D'Elia said. "I was impressed at how well coached they were and the skill level of the team. That was something I hadn't seen before in other teams. I emailed Coach Powers, he emailed me right back, and it just went from there." 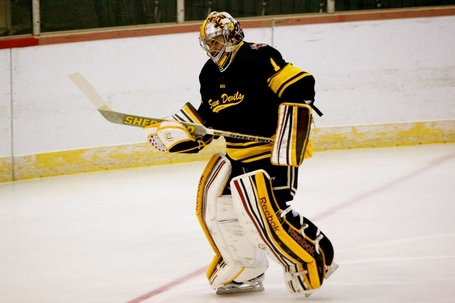 Making the change during the middle of last season, D'Elia immediate made an impact for ASU. Having a head coach who was a former goalie was a great bonus, and D'Elia's new position coach added another positive element to the situation.

"Greg was a goalie here at ASU, so he's got some input I can definitely learn from here and there, and he just keeps me in check, making sure I'm on top of things," D'Elia said. "When I got out here, I met goalie coach Jeff Tecca and he's definitely helped my game for sure. He's a good set of eyes during games and we work together pretty closely during practice. It's just been good relationships and we've just kind of fed off each other."

It speaks to the success both of D'Elia and the ASU program as a whole that he has secured the starting job. The Sun Devils have two other talented goalies on the roster—sophomore Corey Frank and junior Kyle Dietriech—and each one is undefeated on the year with a goals-against-average number under 2.00. Despite the level of skill between the pipes and the possible issues that logjam can raise, the trio is instead a supportive unit.

"We all get along. We're all friends outside of the rink. The three of us are all quiet guys. We don't have too much to say, but when it comes to game time, we're supportive of whoever goes."

One of the aspects that has made D'Elia's success all the more impressive is his diminutive stature. Over the last two decades, in a movement in which his idol Roy led, the standard for goalies has changed to become bigger in size, with . D'Elia, however, is just 5-foot-9, but that hasn't posed any problems for him.

"Everyone wishes they were 6-foot-10 and 230 pounds. That's just the way it goes and I've got to play the hand that I've been dealt. I've been fortunate enough to do some pretty good things despite how small I am, so I really can't complain."

In fact, he's turned what could be perceived as a disadvantage into an advantage, as his size has helped him remain focused on the fundamentals.

"I like to be on top of my crease and control my rebounds for sure. Being a smaller guy, that's very important. I have to make the first save and I have to make it properly and if I don't, I'm usually in some trouble. I just like to make a big first save and make it clean. It just makes things easier for me and my teammates." 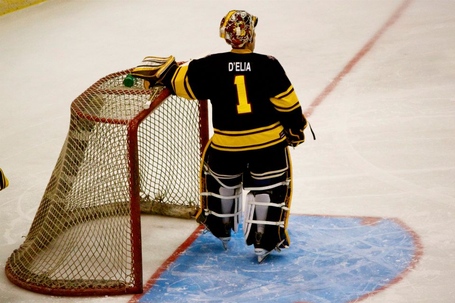 This Thursday night, D'Elia will get the chance to make several saves while helping the Sun Devils exact some long overdue revenge.

Last season, the Sun Devils entered the national tournament as the No. 4 seed, but lost in stunning fashion to 14th seeded Oakland. Eight months later, Oakland comes to town ranked No. 7 and with a maroon-and-gold bullseye on their sweaters.

"We do owe them for what they did to us last year, but we have to approach it like any other game," says D'Elia. "We can't bring all of that emotion that has been bottled up since last year and put that into a game, because things can get out of control like that. Definitely in the back of our minds, we know what happened last year and we have something to prove."

Regardless of the outcome on Thursday, there remains a lot of hockey to be played this season. Even though Arizona State is the only remaining undefeated team in the ACHA and No. 1 in the polls, D'Elia thinks their best days are still ahead.

"Honestly, I don't think we've hit our peak yet. That's kind of the scary thing. We've kind of found our way offensively but I think defensively, we can be so much better. In time, it's going to come. Each week, we're making progress and that's definitely a positive sign."

If the team can continue making these positive steps to a team already at the top of the heap, D'Elia could soon be adding to his national title collection, which is just fine by him.

"I'd love to win as many championships as possible. That's what you sign up for every year."