Will Sutton has raked in all the awards this season, but his teammate could be delivering a similar performance in the future.

About the only thing that has a greater tempo than the Arizona State offense is the pace of Will Sutton picking up awards.

Over the last week, if you stepped away from your iPhone for more than an hour, chances are that you missed the dominant defensive tackle taking home another honor.

For good measure, he also became just the 15th player in Sun Devil history to earn the prestigious "Consensus All-American" title by picking up so much recognition. Sutton's 2012 season has been truly remarkable.

Given his incredible talent and production, the speculation now centers on whether Sutton will take his game to Sundays by forgoing his senior year in favor of the NFL Draft. If he does, it could be a long time before another Sun Devil is able to have the kind of year that he did.

In large part due to all of the attention deservedly lavished upon Sutton, redshirt sophomore Carl Bradford's breakout year has flown under the radar. While that is a shame, it also points to a possibility that it won't take another five years for a Sun Devil to reach that coveted "consensus" status.

Currently in his first season as a starter, Bradford is tied Sutton for the team lead in sacks with 10.5, and second to him with 17.5 tackles-for-loss. Yet for all of that production, Bradford sees this year as one of development and a stepping stone for bigger things. 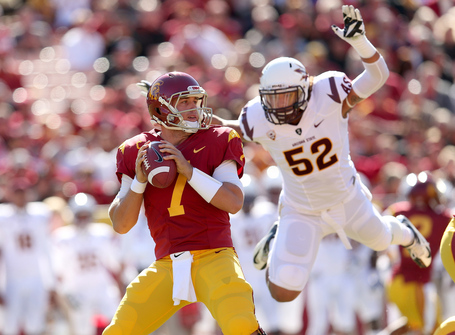 Bradford is poised for a big leap in 2013

"Progress," Bradford labeled the theme of his season. "This is my first year playing a full season. I think I did pretty good, and I'm just working on my weaknesses."

Such progress was made easier by playing with Sutton. With Sutton wreaking havoc on the interior, Bradford attacking from the edges. The duo has become one of the best in the nation, as their 21 combined sacks are the second-most among teammates., and Bradford is quick to credit the impact that Sutton has had on his game.

"It's been amazing lining up next to that guy and playing with him. He plays with tremendous passion and effort," Bradford said. "He's a leader in my eyes. I look up to him and just try to be like him. I've been chasing him all year in terms of sacks. I like the competition we have with each other and we feed off of each other."

Some may look at the Sun Devil defense and believe that Bradford's success is entirely a product of Sutton and the attention he draws, but that simply isn't so. After Sutton went down on early against Oregon with a knee injury that caused him to miss the better part of two full games, Bradford stepped up his game. He responded with a two-sack game against UCLA without Sutton in the lineup and was a disruptive force overall.

But Bradford is far from one-dimensional. Beyond his pass rushing acumen, Bradford is also a stout defender against the run. He's first able to to use his speed to chase down ballcarriers and then use his power to deliver crushing hits, like this one that generated one of his team-high three forced fumbles.

Beyond his dynamic talent, there are a few factors that point to even greater things on the horizon for Bradford.

First and foremost, a relentless work ethic is needed for any player to reach their maximum potential, and that is something that Bradford possesses. Throughout this past offseason and into the year, he worked tirelessly to learn his new position and improve his game. This effort did not go unnoticed by the team, as Bradford received the Tim Landers Iron Man Award at the team banquet on Saturday, an honor that goes to the "player who has displayed an exemplary work ethic in the weight room, on the field and in the community".

Bradford came to ASU as a fullback, and prior to this year had played defensive end and linebacker. However, with the new defense installed by Todd Graham and defensive coordinator Paul Randolph, Bradford's unique combination of speed and strength made him an ideal fit for the new Devilbacker position. Having the success that he has had so early in the new scheme has been a bonus, and Bradford thinks that a full year under his belt will pay off in 2013.

"It's going to make me improve a lot," says of his comfort level in the scheme. "I'm going to be much more familiar with the position and how offenses line up, and I'm going to be even better next year."

With the team losing a key critical player and leader in linebacker Brandon Magee, and with Sutton's returning status still very unclear, Bradford also has his sights set on becoming the type of example to his teammates as Sutton was to him.

"Stepping into that leader role and hopefully helping the younger guys," says of his objectives for 2013. "Keeping up my progression and hopefully they will follow in my footsteps."

While his future looks bright enough to perhaps start clearing some space on the mantle for future awards, Bradford will have none of that. The only award he wants will fit nicely on his finger.

"I don't really have any individual goals. It's all about team to me. Hopefully our team goes far and we get that Rose Bowl ring."