Geographically, yes, of course it is. But what value beyond proximity is there to the title?

It was a relatively quiet and sleepy Wednesday afternoon in Sun Devil Nation.

The weather continued to be picture perfect, taunting those of us stuck inside our offices. ASU students continued their stressful march through finals, and the men's basketball team prepared to take on DePaul later that night.

Then, the power of social media provided a little something to jostle Sun Devil faithful everywhere out from whatever they were doing and put them into attack mode.

In reality, this tweet was harmless. It's simply a playing-both-sides attempt by a radio station that's straddling the fence in a major market, one whose major competitor—Arizona Sports 620—serves as the flagship station for ASU broadcasts.

This fact was made clear just minutes after Sun Devil Nation made some noise.

But, should they give out equal love? Not in a "free market" ability for any American to do what they want within the law kind of way, but in a broader, more fan specific sense. It's just a 10-minute drive from the front door of XTRA 910's building to Sun Devil Stadium. After all. ASU is in their backyard.

This isn't meant to attack 910 for their tweet, stance, business practices or anything of that ilk. They do what they do for their business, and that's fine. Hooray capitalism.

But their tweet serves to underline the troubling situation that the metropolitan Phoenix area, and Maricopa County at large, is not conclusively "Sun Devil Country".

Sure, Arizona State has geography in their favor, which also means that they have the strength in numbers locally. Of the 3.8-million residents of Maricopa County, over 180,000 are ASU alums, compared to a stout but much smaller 40,000 University of Arizona graduates.

Yet for how much we Sun Devils would like to say that our hometown is "Sun Devil Country" the best that can honestly be said of ASU's ownership of the area is "pretty much". Essentially, there has been a growing Wildcat insurgency on ASU's home, and the struggles of the Sun Devils have done nothing to root them out.

Given that lack of an ASU stranglehold over the area, it's no wonder that the Wildcat presence has been pervasive.

Last spring, U of A purchased billboards in the greater Phoenix area proclaiming the land "Wildcat Country", including one right next to Sky Harbor Airport. Said Arizona athletic director Greg Byrne at the time "This isn't the University of Tucson - it's the University of Arizona."

Quite a visual for those visiting the Valley to see shortly after they set foot in Phoenix, eh? 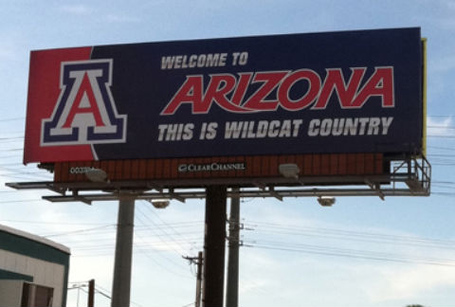 Just a hunch, but there's likely not a lot of Auburn billboards displayed in Tuscaloosa, and if there are, they don't last too long.

Beyond simple marketing, there is one major reason why the county is not a complete "at your own risk" zone for the 'Cats.

Sun Devil Nation has been called all of those over the years, and while it may be difficult to hear, there are strong elements of truth to them. Sure, the reasons for this have been outline ad nauseum over the years: transient population, wealth of entertainment options in the area, lack of recent success and so on.

That leads into the issue of whether fan support breeds success, or if success is a necessary prerequisite for the fans and alumni to stick around.

In his recent column, former Sun Devil defensive tackle Bo Moos perfectly outlines how the answer falls somewhere in the middle: without the fan support, a top program can not be sustained.

And without that sustained success, a fanbase will find it a damn difficult task to truly lay claim to their "country".

The legendary programs and the die hard fanbases around the country didn't simply happen because of geography. No nation simply just stumbles into being.

They are built. They are earned. They are defended.

Tempe...Phoenix...Maricopa County...they're not there yet. Certainly it's Sun Devil soil, but it's not nearly as decisive as most would assume...or want. There's a lot of work to be done for that to occur, but it's possible.

If it ever is to happen, it will take many years, many Territorial Cups and a few more Rose Bowls sprinkled into the mix to be able to claim that this area as a fully and totally Sun Devil Country. Maybe one day, it can reach the point that any future "Wildcat Country" claims can only be perceived as intended with hipster-ish irony.

Until then, the nation's fourth-largest county and sixth most popular city, will remain a Sun Devil Stronghold, continually fending off the persistent red-and-blue menace.

While that battle rages on, my esteemed Speak of the Devils co-host Joe Healey astutely pointed out that one ownership stake was recently decided...at least for the next two years.