When they aren't scoring goals and making saves, the ASU hockey team is making a difference in the community

Share All sharing options for: For Sun Devil Hockey, Winning and Giving Go Hand in Hand

For the Arizona State hockey team, 2012 has found them in a very giving mood.

On the ice, the Sun Devils have given their fans a lot to cheer for, winning 20 of their first 22 games and securing the No. 1 ranking in the ACHA. For their opponents, ASU has given coaches headaches and goalies a higher goals-against-average.

More importantly, that charitable attitude has carried over to the program's off-ice efforts in the community.

Instead of putting pucks in the net, the Sun Devils have put smiles on children's faces. Instead of stopping shots on goal, they've helped stop hunger. Instead of working towards another win, they're helping to promote youth literacy.

That devotion to serving the community, in addition to creating one of the nation's top hockey programs, starts at the top with ASU Hockey General Manager Ken Lind.

"At ASU we feel it is critical to make sure our student athletes excel in the classroom, on the ice and in the community," Lind said. "There are so many Valley organizations that can use a hand, and the players really enjoy giving back for all they are blessed with."

At the core of the efforts is Sparky's KidZ, a non-profit organization that Lind created to serve as the team's charitable arm. Sparky's KidZ has already racked up an impressive list of efforts this season, with many more upcoming in 2013.

One organization that has been a regular beneficiary of the program's efforts is HopeKids, a group devoted to enriching the lives of children battling cancer and other life-threatening illnesses. On October 11th, the team welcomed a group of kids for an afternoon of ice skating before having a pizza party. Another 35 kids from the organization were guests at the team's December 7th game, where they also were able to drop the ceremonial first puck. 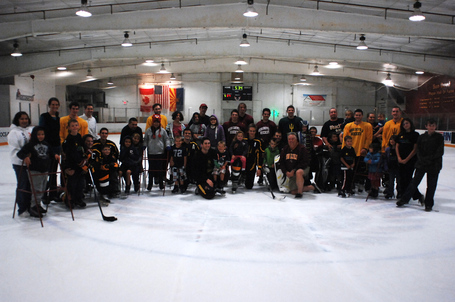 Throughout the months of November and December, the team partnered with Phoenix Children's Hospital and the Arizona High School Hockey Association to spearhead a holiday toy drive at all home games.

"We were trying to think of a player/fan/management program that we could all participate in," said Lind. "My son Matt contacted Phoenix Children's Hospital and we all thought it was a natural extension of our community service work. What better way to say thanks then too put a smile on a sick child's face."

Thanks to the drive and the generosity of the fanbase, 414 toys were donated to brighten the holidays of those brave children. In addition, 230 brand new children's books were donated throughout that time.

"So many people chipped in and helped out it really was incredible," said head coach Greg Powers. "Our staff did an amazing job putting this together and its great knowing our program will contribute a to giving children of need a happier holiday season."

But the Sun Devils' inner-Santa isn't done, as they will continue helping the efforts through Christmas Eve.

"Additionally we have several players that will be going to Phoenix Children's Hospital on December 24th to volunteer there time in helping with the donation process with the families and children," said Lind. 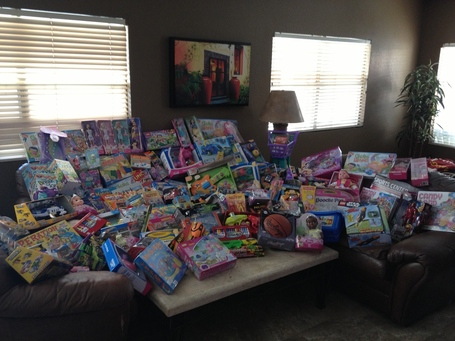 The team also teamed up with us here at House of Sparky to make a difference during the Sun Devils Unite Holiday Food Drive.

During their recent weekend series against Robert Morris-Illinois, 70 meals were pledged to be donated for every goal scored by the team. Thanks to their seven goal output in the series opening victory, the team managed 10 goals over that weekend and sent 700 meals to St. Mary's Food Bank.

So in a span of three months, the team has produced a number one ranking, 20 wins, 230 books, 414 toys, 700 meals and more smiles and lasting memories than can be counted.

Over the next few months, while the team will be engaged in a relentless quest for a national title, it will be good to know that their altruism is championship caliber.