ASU Football: Will Sutton is now a CONSENSUS All-American

At this point, the list of All-American teams he's not on is way shorter.

Share All sharing options for: ASU Football: Will Sutton is now a CONSENSUS All-American

When he stepped onto a football field this fall, Arizona State defensive tackle Will Sutton was unstoppable. From powering past offensive linemen to smashing running backs to pieces and throwing around quarterbacks like rag dolls, Sutton was dominant.

That dominance has carried over to the awards season.

Since our last check just a few days ago, in which Sutton had carried home the Pac-12 Pat Tillman Defensive Player of the Year, as well as a bunch of other first-team and All-American spots, he's added more

Three more, to be precise, as he is now a first-team All-American according to The Sporting News, Athlon Sports, and now the Walter Camp Foundation. With these latest three selections, Sutton has earned the coveted title of "Consensus All-American".

Sutton is the 15th player to be a consensus selection among the 18 seasons a Sun Devil has done so. 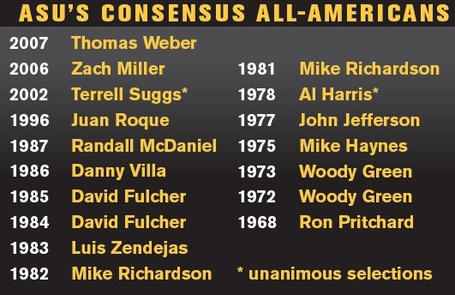 Also on Thursday, Fox Sports NEXT named Sutton to their All-American second team, which makes it clear that they are more focused on the "next" and missing the "now", as why else would the WillDaBeast not make the first team?

The most current list of Sutton honors, courtesy of ASU Media Relations: