Months of watching every college basketball game you could get from your cable provider, analyzing game clips on the internet, preparing massive Excel spreadsheets of stats, and crafting the a flawless algorithm have led to what should be the perfect NCAA Tournament bracket...

But of course, once the action gets started, you get crushed by the marketing director's secretary. For the third straight year.

Therefore, this season, it's time for drastic action. In order to beat the clueless yet successful, you must think like them. Instead of point guard assist/turnover ratios, free throw percentages, road record and such, pick your bracket where it counts--school mascots.

Let's take a look at how this strategy unfolds.

In the South, the high seeds held serve except for one major upset. The Jackrabbits on South Dakota State took down the blase Bears of Baylor (Baylor also is punished for these).

The West was dominated by Spartans, as top seeded Michigan State advanced was paired with a shocking upset, as 15-seed Norfolk State toppled the Missouri Tigers. The other major news was another 14-seed win, as the Iona Gaels, off their play-in win over BYU, knocked off the Marquette Golden Eagles, probably because the secretary has a good friend named Gale.

The East was quiet except for the Ohio State Buckeyes losing to the 15-seed Loyola Greyhounds. Stalwarts like the Cincinnati Bearcats and Florida State Seminoles marched easily through.

No major upsets were had in the Midwest. In a great battle, the 11-seed NC State Wolfpack beat the 6-seed Aztecs of San Diego State. And in proving this bracket was only big enough for one set of Gaels, No. 7 St. Mary's fell to the 10-seeded Purdue Boilermakers.

The South got turned upside down quickly, as the Iowa State Cyclones bested top seeded Kentucky, and No. 2 Duke fell to the popular Fighting Irish of Notre Dame. Two dangerous middle seeds, the Witchita State Shockers and the UNLV Running Rebels, also advanced.

The West continued to live under Spartan rule, as Michigan State and Norfolk State continued their march, dispatching the St. Louis Billikens and the Florida Gators respectively. The major story was the advance of the Iona Gaels, chiefly because this logo is so awesome.

The main event in the East was a tough battle between the Bearcats and the Seminoles, with Cincinnati winning a close one. Syracuse, Vanderbilt and West Virginia also advanced.

"Roll Tide" was the name of the Midwest game, as Alabama knocked off the top seeded Tar Heels. The Wolverines made Bill Cosby sad by eliminated his beloved Owls, and the Wolfpack and Boilermakers picked up wins as well.

The Shockers are no longer shocking, as they win again, putting an end to the Cyclones. They will face the Running Rebels of UNLV, who sobered up the Fighting Irish with a resounding win.

In a battle of Cinderellas, No. 15 Norfolk State eliminated the impressive beards of the Iona Gaels. This set up an all Spartan final, as Michigan State topples the Lobos of New Mexico.

In the East, it will be the Commodores, coming off an impressive win over the Orange of Syracuse, against the Bearcats, who destroyed the Mountaineers.

The last regional final will see the Wolverines, who stopped the Tide's roll face off against the Wolfpack, who derailed Purdue.

One middle seed had to go, and it was the Wichita State Shockers, who sadly now have to return to Wichita after they lost a close one to the UNLV Running Rebels.

The West championship was an all Spartan battle, and as expected, it was fierce and bloody, but in the end, Norfolk State's inferior logo was their undoing.

Another 6-seed made it's way to New Orleans, as the Bearcats beat the Commodores.

Finally, in the most surprising result of all, the Wolverines were stunned by the Wolfpack, who proved there is strength in numbers.

As the only No.1 seed left, the Spartans were the favorites, and they held serve, defeating the Rebels. That set up a final against the Wolfpack, who proved to be too much for the Bearcats.

In a battle between the favorite and the underdog, an upset was not to be had, as Sparty was too much for the Wolfpack, and Michigan State is crowned the NCAA champions. 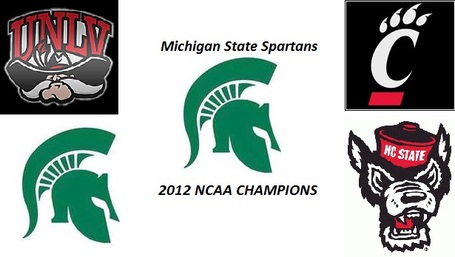 In the end, there are 9.2 quadrillion possibilities in the NCAA bracket. Picking by mascot has as good a chance as any...