One of the most anticipated developments surrounding Arizona State football has been the renovation of Sun Devil Stadium. Today, many of those details came to light during a press conference held by the school and new AD Steve Patterson.

Renovations on the stadium will begin following the 2012 season, with a target completion date prior to the beginning of 2017. The location between the two buttes is a complicating factor in the renovations, forcing the renovation to be done in phases, with the east side done first, followed by the west, with the roof being the final piece. As such, the team may have to play one or two seasons away from the friendly confines in Tempe, at either University of Phoenix Stadium or Chase Field. "We won't go play in Tucson," joked Patterson.

Sun Devil Stadium will see a new state-of-the-art sound system, video and scoreboards, along with new ADA amenities and features. Also among the upgrades will be a new press box with modern capabilities.

The final capacity will be in the range of 55,000-65,000, down from the current 71,706. Plans for lower bowl renovations have not yet been finalized, as it could remain in it's current state or be totally overhauled. It's hoped that the student section will be located next to the band in the future.

With the reduced capacity, larger seats will be installed, offering more leg room for fans and more seats with a seat back.

Patterson says that the renovation is necessary to stay competitive in the current climate, and is targeting June for the financing plan to be in place. It's been said that the entire cost would be around $300-million.

The most striking feature is the series of fixed fabric panels that will hang over the stadium, bringing shade to the fans, while also retaining an open-air feel and look. The north endzone will be open, allowing for a view of Tempe Town Lake. The cooler atmosphere will allow ASU to host day games earlier in the season than before, which will help accommodate Pac-12 Network obligations.

As a result of the canopy, the natural grass surface will be taken out and replaced by FieldTurf.

With the renovations, ticket prices will be going up, but as Patterson pointed out, the value of those tickets will rise as well.

Take a look at the interior and exterior renderings of the stadium, courtesy of ASU. 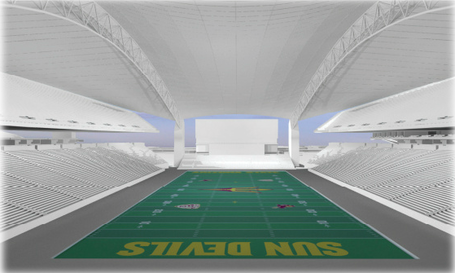 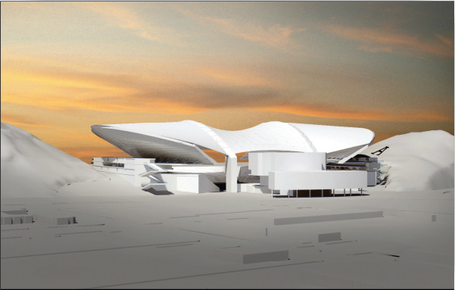 Former ASU star Rudy Burgess, now a member of the program's administration, had this to say, "For the most part, I think the new stadium renovations will bring a lot more excitement to ASU as a whole. It's going to help us in recruiting and definitely help bring up the excitement in Sun Devil Stadium again."

The end result should help to greatly increase the school's football revenues, giving it a much needed boost in the current hyper-competitive climate.