OK, about that asterisk. As of now, the official Sun Devil football schedule lists the season opener against NAU as either Thursday August 30th or Saturday September 1st. This comes from uncertainty pertaining to television, but for our purposes driven by the desire for football to be here ASAP, we'll defer to the former.

To countdown the final 100 football-less days, we here at House of Sparky will bring you one aspect of Sun Devil football--be it a play, player, food, experience, tradition...anything really--per day until the Sun Devils and Todd Graham kick it off.

After years of doing an Alabama-like style of having the player's number on the side of the helmet, ASU changed it up in 1975, just in time for arguably the greatest season in school history. They introduced a new gold sunburst logo to the helmets, with "ASU" in the middle in maroon.

The following year, they made a wise tweak, changing the sunburst to a contrasting maroon, and for part of that year, added a white center stripe. They went back to a standard single maroon stripe for the remainder of the decade until Sparky made his debut in 1980.

It's a great old-school look that captures some of the unique qualities of the team, school and state. Being the helmet worn during part of the greatest era in Sun Devil history doesn't hurt either. In tribute, ASU wore the old late 1970s style during 2008's homecoming game against Washington State. 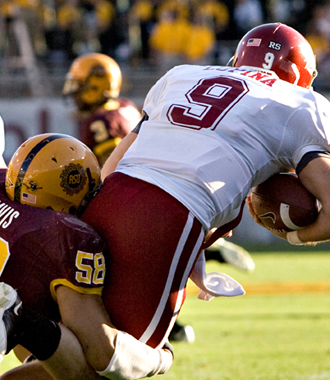