For the 10th time in school history, the Arizona State Sun Devils are heading to the Women's College World Series. After some tense moments in the Tempe Regional and then a thrilling comeback Super Regional win over Louisiana-Lafayette, the defending champs are now in Oklahoma City and ready for their title defense.

Here are details for the Devils in the WCWS.

Format: The eight teams are divided into two brackets. Each bracket will engage in double-elimination play until a winner moves on to the championship series. That series will be a best of three match-up for the national title.

When: Bracket play begins Thursday May 31st and runs through Sunday June 3rd. The championship series will begin on Monday June 4th, with Game 2 on Tuesday and, if necessary, a Game 3 on Wednesday.

In The Other Bracket: No. 1 seed Cal, No. 4 seed Oklahoma and unseeded LSU and South Florida. 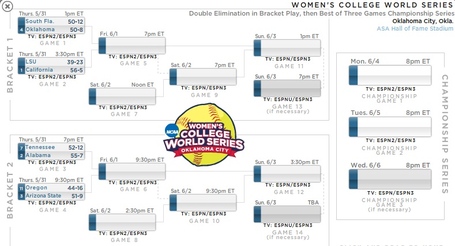