Finally, the time has come to discover the history behind Sparky the Sun Devil. Read up on ASU's older mascots in last week's entry.

Sparky the Sun Devil has an illustrious past. In modern days, Sparky is a highly recognizable symbol of Arizona State University, ubiquitous as the mascot of the Pac-12 school.

Sparky didn't always have it so good - as a matter of fact, he comes from quite humble beginnings. Back in 1946, The State Press pushed heavily for a change to be made - previously playing under the Bulldogs mascot, the student body yearned for something more unique and indicative of the weather conditions of Tempe.

From this desire, the idea of the Sun Devil was born. A vote was held on November 8, 1946 - 819 students voted in favor of the change, while only 196 dissented. The landslide victory for the Sun Devil moniker was the first step in the creation of Sparky. 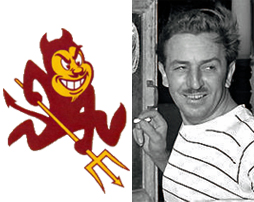 Our beloved mascot was designed by Bert Anthony, an artist and Arizona State alumni who at one time worked for Walt Disney. Those who compare Sparky to a picture of Mr. Disney will certainly notice a similarity in facial features, leading many to believe that Anthony held negative feelings towards the larger-than-life entrepreneur.

Take a look at the image on the left, courtesy of Rivals.

Sparky finally found his way onto the ASU helmet in 1980, lasting for over 30 years before 2011's introduction of the new pitchfork helmets.

The introduction of Sparky brought about many traditions in the athletic department, from the pitchfork to Sparky's pushups after points scored. The Sun Devil is the height of ASU athletic culture and represents the team both on and off the field.

These days, you can see him leading the charge at the beginning of Pat's Run, or making charity appearances in the community. Our look may change and our colors may evolve, but Sparky the Sun Devil is the definition of ASU.

To see all of the variations of Sparky from 1965 through 2005 (and there are several), head on over to the official ASU News website.