It's not easy to assess a difficulty level for a college football schedule, particularly when your team has so many question marks on both sides of the ball. With a lot of turnover at key positions (quarterback, wide receiver, linebacker), a new coaching staff and a new philosophy on both sides of the ball, things could be tumultuous in ASU's 2012 campaign.

First, lets go over the vitals of the 2012 Arizona State football schedule.

The schedule offers a lot of entertainment for college football fans in Tempe. Mike Leach comes to town in his first season as head coach of the Cougars while fresh faces in the form of Illinois and Utah come to town. The biggest game is against Oregon, but that might be a blowout depending on how the young Devils progress into the fall. House Of Sparky May Predictions:

Full schedule to be seen after the jump, courtesy of FBSchedules.com. What game are you most excited about? Are you headed to any road games in 2012? Make your predictions for the ASU season record in the comments section! 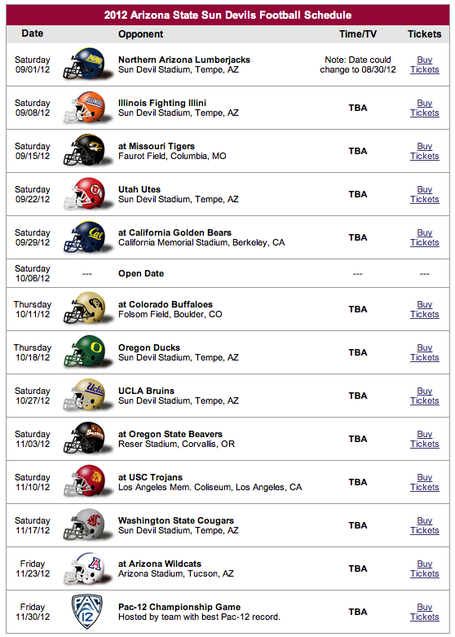