2012 WCWS: ASU Vs. Alabama, Scouting Report On The Crimson Tide

Share All sharing options for: 2012 WCWS: ASU Vs. Alabama, Scouting Report On The Crimson Tide

Arizona State got another Oklahoma City gem from Dallas Escobedo and eeked out enough runs in support to top Oregon last night 3-1. The victory advances the No. 3 seed Sun Devils to a potentially epic showdown with No. 2 seed Alabama.

Alabama is one of the premier teams in the nation with a slugging lineup, a dominant ace and a terrific coach. Here's what you need to know about the Crimson Tide.

Path to WCWS: The Crimson Tide are currently riding a nine-game winning streak. After winning the SEC Tournament, they dispatched Tennessee-Martin and South Alabama twice to win the Tuscaloosa Regional before beating Michigan twice in their Super Regional match-up. They faced SEC rival Tennessee to open WCWS play earlier on Thursday, and held off a late Volunteer charge to win 5-3.

Offense: While they don't hit for an elite average or post overwheleming on-base figures, Alabama is one of the top power teams in the nation. Only two teams (New Mexico and Oklahoma) have sent more balls over the fence than the Crimson Tide.

Their sluggers are shortstop Kaila Hunt and DH Amanda Locke. Hunt leads the team with 20 home runs and 71 RBI, and Locke has 17 and 51. Both players earned second-team All-American honors.

A great number of their RBI are in the form of Alabama's speedy duo atop the order. Kayla Braud (.353 average) and Jennifer Fenton (.388) get on base with great regularity, and run, run and run some more. They have combined for 84 steals on the year, and will provide a major headache to ASU should they reach. Fenton's play in particular was outstanding, and earned her a a spot on the third-team All-American team.

Cleanup hitter and first baseman Cassie Reilly-Boccia drove in three on Thursday and forms the middle of a potent trio with Hunt and Locke. Rounding out the dangerous top six of the lineup is right fielder Jazlyn Lunceford, hitting .331 and chips in with 12 steals.

Pitcher Jackie Traina helps herself at the plate with a .305 average, but the rest of the starters are all hitting under .300, but as to be expected, can all slug the ball out of the yard should an ASU pitcher make a mistake.

Pitching Staff: Much like Oregon, the Alabama staff is built around one stellar ace.

Sophomore Jackie Traina is one of the elite hurlers in the nation, and like ASU's Katelyn Boyd and Alix Johnson, is a first-team All-American. Thursday's win was her 38th on the season, the highest total of any pitcher in the country. She is a powerful strikeout artist, and after she struck out eight Volunteers, she ranks seventh in the country with 324.

ASU was able to make the most out of only three hits in Thursday's win against Oregon, and may once again need to figure out how to do enough with a scarcity of hits against Traina.

Head Coach: The Tide are led by Patrick Murphy (no, not that one). Murphy has had an amazing run at the helm of the Crimson Tide, taking them to seven WCWS in his 13 seasons and twice being named the SEC's Coach of the Year. It's not often that ASU faces a team with a coach the caliber of Clint Myers, but Murphy is nearly in that class. 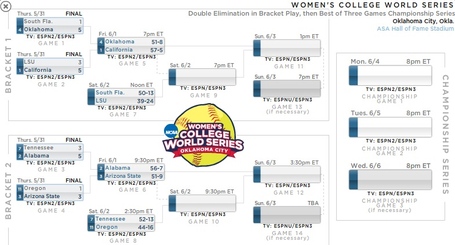