Their reward for such a gritty win? A Friday night date with tournament No. 2 seed Alabama, who held off Tennessee in their first WCWS game.

The game figured to be an evenly contested clash of titans. Coming in to the game the teams were tied for second in the nation in scoring with nearly seven runs per game.

Yet runs figured to be a scarcity, as each team featured a true ace in the circle. Crimson Tide pitcher Jackie Traina is a first team All-American on the strength of a NCAA-high 38 wins, and ASU's Dallas Escobedo ran her career WCWS record to 6-0 with the victory over Oregon.

Something would have to give.

Early on, it was the hitters yielding to the prowess of Traina and Escobedo. Through the first two innings, there was only one hit, a single by Alabama's Jazlyn Lunceford. The Tide threatened by getting two runners aboard in the second and third innings, but Escobedo managed to induce a foul pop-up and a dribbler back to the circle to end each threat.

Meanwhile, Traina was able to overcome some Sun Devil threats. Despite no hits, a pair of walks and an error tested the sophomore's mettle. She came through each time, and racked up five strikeouts through three.

Finally, the Sun Devil hitters broke through. After issuing a pair of walks to open the bottom of the fourth, Sam Parlich delivered the team's first hit of the game, an RBI single that scored pinch runner Kayla Ketchum. However, any chance of a big inning was dashed by Traina, who struck out the next two and induced a weak groundout to limit ASU's lead after four innings to 1-0.

It would be short lived. Courtney Conley led of the top of the fifth with a single, moved to second on a ground out and would score the tying run thanks to a single by Jennifer Fenton. Like ASU, any possibility of further damage was quickly snuffed out. A sharp liner to third was snagged by Haley Steele, who began the inning-ending double play.

The next inning, the nation's fifth-best home run hitting team struck. Amanda Locke ended a 12-game home run drought and an 0-for-16 slump when she launched her 18th of the year over the centerfield fence to put the Crimson Tide ahead 2-1.

From there, it was on Traina to hold the lead for the Tide...and hold it she did.

In the sixth, she induced a pair of pop-ups and notched her ninth strikeout of the game to end it. In the final frame, she cast aside a leadoff single by Talor Haro to finish off the Devils with a pair of strikeouts. Despite five walks, Traina was outstanding, striking out 11 and giving up just three hits.

In a losing effort, Escobedo was excellent. She held one of the best offenses in the country to just two runs on seven scattered hits and struck out seven. Escobedo drops to 24-7 on the year.

The Sun Devils now drop into the loser's bracket and are facing elimination on Saturday. They'll take the field at 4:00pm PST against LSU. With a win there, the Sun Devils would advance to Sunday's action, where they'll need a pair of wins to advance to the championship series. 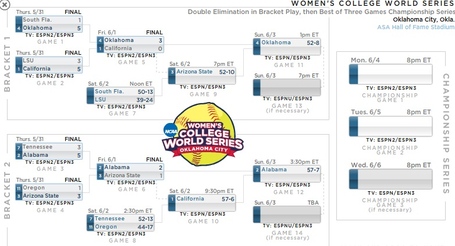 Until tomorrow's game, the team should listen to this on repeat...