Ask a group of Sun Devil fans which position group has had the most historical success, and you're liable to get a wide variety of answers.

With Danny White, Andrew Walter, Rudy Carpenter and Jake The Snake, has to be quarterback!

How about running back? Woody Green, the Malone brothers, Freddie Williams, J.R. Redmond and more all the way to Cameron Marshall.

Well, let's toss another group into the mix: the defensive line. The Sun Devil defensive front has often been a fearsome force, with Al Harris, Jim Jeffcoat, Shante Carver, Dexter Davis, Terrell Suggs and others carrying on a great lineage that began in earnest with our No. 76 entry on our 100 Day Countdown: Curley Culp.

Born and raised in Yuma, Arizona, Culp went on to star at Yuma High before becoming a Sun Devil under Frank Kush. The 6'2", 260 pound Culp was a major force who saw action along both the offensive and defensive lines, beginning in 1965, but it was on defense where Culp would make his mark.

Manhandling opposing offensive lines, Culp would go on to earn All-WAC honors as a junior in 1966. The front of the Sun Devil defense would see a big improvement against the run, limiting opponents to just 103 yards per game, the third best figure in school history to that point.

In addition to his on-field play, his leadership ability grew to the point that Culp was named a team captain for 1967, and Captain Culp would respond in a major way.

The Sun Devils obliterated opposing run games, holding them to just 79.8 yards per game, still one of only three times in ASU history an opponent has averaged less than 100 yards-per-game. Culp of course was at the center of this dominance from his middle guard position, and his play once again earned him All-WAC honors and also a spot on the All-American team.

Not to be outdone on the gridiron, Culp was one of the finest wrestlers the school had ever seen. A three-time WAC champion, Culp became ASU's first NCAA wrestling champion in 1967, the same year he won 19 straight matches, many in quick fashion like this one. 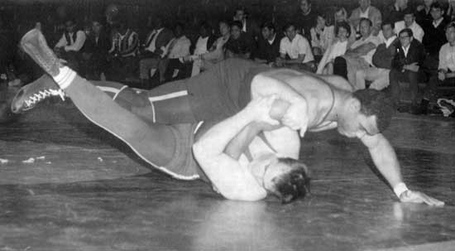 Culp went on to be selected in the second round by the Denver Broncos, but soon found himself as a Kansas City Chief, where he played from 1968 to 1974. It was during Super IV, when Culp's Chiefs defeated the Minnesota Vikings, that many consider the 3-4 defense to have been born. Culp was moved from his typical spot to a position directly over the Vikings' Pro Bowl center Mick Tingelhoff, and Culp commenced to manhandle him all game long.

During his career, which included subsequent stops as a Houston Oiler (1974-1980) and the Detroit Lions (1980-1981), Culp earned six Pro Bowl trips and was an All-Pro in 1975. In compiling a list of the greatest player in NFL history for each jersey number, Sports Illustrated chose Culp to represent No. 61.

In recognition of his great Sun Devil career, Culp was inducted into the Sun Devil Ring of Honor this past November.

See all the previous entries on House of Sparky's 100 day football countdown here.