The Arizona State Sun Devils have been down this road before. After dropping games against Syracuse in the Tempe Regional and Louisiana-Lafayette in the Super Regional, the defending national champions rallied to advance and keep their title reign alive.

They'll need to dig down deep once again after being defeated by the No. 2 seed Alabama Crimson Tide last night 2-1. The loss dropped ASU into the loser's bracket of the WCWS, meaning that they'll need to win today, then twice on Sunday to advance to the championship series.

But one game at a time. Today, the Devils will face off at 4:00pm PST/7:00pm EST against unseeded LSU. The Tigers find themselves in the loser's bracket by virtue of their 5-3 loss to Cal on Thursday. They eliminated South Florida earlier in the day 1-0 to advance to this game versus ASU.

The Tigers are a one-dimensional team, but they do that dimension very, very well. In the circle, they feature pitcher Rachele Fico, who leads the nation with a microscopic 0.96 ERA. She has held opposing batters to just a .179 batting average and only surrendered eight home runs in 225 2/3 innings on the year.

That doesn't bode well for the ASU offense, which entered the WCWS as the nation's third highest scoring team, yet has been held to six total hits over the first two games. The Sun Devils will need much better production from their pair of first team All-Americans at the top of the order--shortstop Katelyn Boyd and outfielder Alix Johnson--who combined to go 0-for-8 against Alabama, and all four of Johnson's at bats ended in strikeouts.

The Sun Devils and pitcher Hillary Bach should be able to limit the damage the Tiger offense does. LSU ranks 267th in the nation with a team batting average of just .222, and they don't have a player on the team hitting over .275. They also don't drive the ball, with a putrid slugging percentage of .287, and no player has more than seven home runs.

Unless ASU can figure out one of the nation's best pitchers, this should be another tight ballgame with each run contested tooth and nail. 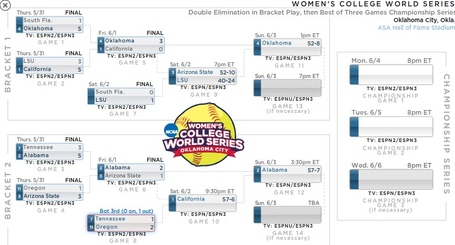