Been there, done that. Such was the attitude of the Arizona State Sun Devil softball team this postseason. Twice before, they had come up against elimination, and twice they have responded with decisive victories.

They faced that same scenario a third time on Saturday at the Women's College World Series, due to a hard fought 2-1 loss on Friday night to No. 2 seed Alabama. That put ASU in the loser's bracket and an elimination game against unseeded LSU, who had rebounded from a loss to Cal with a 1-0 win over South Florida earlier on Saturday.

The headline coming into the game was ASU's hitting woes at the WCWS--five hits over two games. They would seemingly get no relief against LSU ace Rachele Fico, the nation's leader in ERA (0.96).

Fico figured to be engaged in a pitcher's duel against ASU's Hillary Bach, as the Tigers are one of the worst hitting teams in the country, posting a terrible team batting average (.222) and slugging percentage (.288).

The early going played exactly to script. ASU failed to get a hit through the first two innings, while Bach surrendered just a pair of Tiger hits. The frustration continued to mount.

But a lineup as talented and experienced as the Sun Devils can't be held down for long.

Elizabeth Caporuscio lead of the third with a single, and one out later Katelyn Boyd moved her to second with a bunt single. First-team All-American Alix Johnson, who had struck out four times against Alabama, then launched the first pitch from Fico over the centerfield wall for the 3-0 lead.

The fourth inning brought about some odd happenings and an LSU threat.

Bach, already called for two "illegal pitches" due to her right foot being off the ground during the pitching motion, was called for two more in the inning. This helped move Simone Heyward to third base. Bach then drilled Juliana Santos with the next pitch to put runners on the corners. Thankfully, Bach induced a weak groundout from Allison Falcon to end the inning. After the inning, Bach enlisted two teammates to the bullpen to help her refine her mechanics, and it seemed to help.

To give Bach some breathing room, Johnson lined a two-out single that nearly beheaded Fico and stole second base. Haley Steele then hit a soft grounder to second, but Falcon's throw went wide, allowing Johnson to score and extending ASU's lead to 4-0. Fico then gave up a walk and a single to load the bases and was pulled for Brittany Mack.

Mack fared no better. Sam Parlich lined a single to left field, and a misplay by Ashley Longoni allowed two more runs to score. The Devils loaded the bases after Nikole Afusia walked, but a great diving catch by Santos ended the ASU threat.

Bach, now pitching legally, was able to make the lead hold. Over the final three innings, she surrendered just a single hit. In picking up her 22nd and most important win of the year, Bach gave up only four hits and walked only one.

The victory for the Sun Devil keeps their title reign and repeat hopes alive for one more day. They now face No. 4 seed Oklahoma and dominating pitcher Keilani Ricketts, perhaps the hottest current team in softball. First pitch will be at 10:00am PST/1:00pm EST with TV on ESPN. 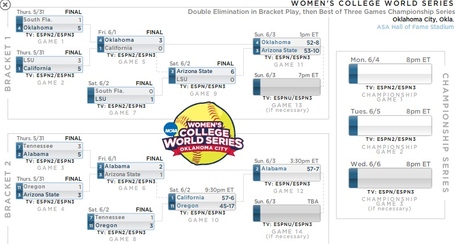