Share All sharing options for: ASU Football 12 In '12: Our Q&A With Sun Devil QB Michael Eubank

As the kickoff to the 2012 season draws closer every day, the excitement for the start of the "Speaking Victory" era of Sun Devil football continues to grow. In addition to debuting a new coaching staff, new on-field schemes and a new mentality, the team will be breaking in a new starting quarterback for the fifth straight season. That's a lot of "new".

The three-way battle between Mike Bercovici, Taylor Kelly and Michael Eubank has become the dominant offseason storyline surrounding the team. During spring ball, each player saw a lot of the time with the first-team offense and made several big plays, but also struggled through the expected growing pains.

With the battle still undecided and set to continue into fall camp, I caught up with Eubank, a physical specimen at 6'5" and 242 pounds, whose combination of powerful arm and running ability has many fans tantalized with his potential.

Without further ado, we now bring you the first installment of our new "12 in '12" series, in which we'll pose a dozen questions to the key figures in ASU's 2012 season, with the talented redshirt freshman.

Brad Denny: One of the biggest changes from last year is the new culture being installed and fostered by Coach Graham. What is your take on those new values and their impact on the program thus far?

BD: As you are now in the mix to inherit Brock Osweiler's starting job, what are some things you learned from Brock last year that you feel has made you a better player?

ME: I feel I learned composure, definitely in tough situations, because last year, obviously, we were in a lot of tough situations. I learned the rights and the wrongs of leadership. I definitely learned how to communicate with my receivers and my players a lot better.

BD: How does the new offense of coordinator Mike Norvell suit your abilities? Conversely, which aspects of it will be challenging?

ME: I think the ability for me to run, to get out and use my legs a little bit to stretch the defense. I don't really find anything too difficult with the offense being that I learn it every day. Even in the offseason, I find myself in the film room trying to get better with the offense, so I think by the time the season comes, the offense will be a breeze.

BD: A lot has been made of how the new offense requires a mobile quarterback, whether that's in the traditional running-quarterback style you employ or a player like Mike Bercovici who, while not a runner, has the ability to move within the pocket and make plays on rollouts. Does the offensive gameplan change radically depending on the style of quarterback on the field, or are the expectations the same regardless?

ME: They're generally the same. The offense isn't really too difficult. It's designed for a mobile quarterback, but if you're good in the pocket, you'll be just fine. I definitely feel that having a mobile quarterback will transcend and make the offense a lot better. It will open up a lot more holes and bring the defense in closer, so the deep passes will be open a lot. That's definitely our gameplan this season.

BD: Speaking of your running ability, how do you balance making those big plays with your legs and exposing yourself to those big hits versus minimizing the risk of injury? Is that something that the coaching staff has discussed with you? 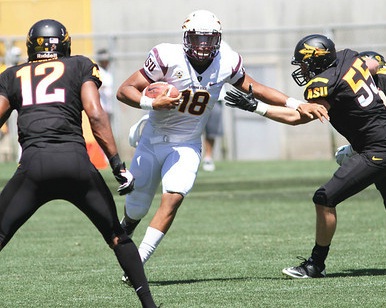 BD: Given the on-going quarterback competition and the general inexperience level of the offense, what challenges are there in establishing yourself as a team leader?

ME: Before, it was definitely me trying to be a vocal leader. A redshirt freshman among seniors, among 21, 22-year olds, that definitely was a difficulty at first. But getting help from my teammates and understanding that they wanted me to be the leader, getting help and feedback from them definitely helped me out a lot. As guys start to call on me more, it definitely becomes second nature.

BD: Let's talk about some of your weapons on offense. Perhaps the greatest strength of the team in the the backfields, with a talented stable of running backs led by Cameron Marshall? How big of an impact does the running game make for a quarterback making his first start?

BD: On the flip side is the receiving corps, where there are question marks up and down the roster. What is your impression of the group, and who are some players you feel are primed to be major contributors this fall?

BD: What are your personal goals, both for this season and over the remainder of your Sun Devil career?

BD: Be it a player, philosophy or scheme, what is the biggest X-factor for the 2012 Sun Devils?

ME: The biggest X-factor would definitely be all of us coming together and understanding that God is the reason that we're all here. God is the reason we are all on the field and keeping us safe. Just putting the Lord first before we do anything, and making sure that the fans know it's just not our ability, but it's His blessing that definitely has endured for us this season.

BD: What should fans expect from the "high-octane" team this fall?