After two games played in the 2012 Women's College World Series, the Oklahoma Sooners have only given up one run. In the first game they held South Florida to a single score, then locked down the nation's top seed, California, in a two-hit stunner. Keilani Ricketts has been untouchable in the circle for the Sooners, striking out 27 batters in Oklahoma City.

Another fun fact about Ricketts? She bats cleanup for the Sooners. In a game where most pitchers focus on their craft, she excels in both pitching and hitting. Ricketts won't have it easy on Sunday afternoon, however - she is facing the nation's top offense in Arizona State.

Led by Katelyn Boyd, Alix Johnson and Amber Freeman, the Devils have a formidable lineup from top to bottom. You know the classic paradox, "what happens when an unstoppable force meets an immovable object?" We will find out the answer today.

Alabama, on the other side of the bracket, faces off against the aforementioned Cal squad. With both Pac-12 teams facing elimination, this afternoon offers plenty of excitement for softball fans across the country. Will ASU be able to rally and continue their quest for a repeat title, or will an SEC team take home a softball championship for the first time?

The actions starts at 1:00 PM Eastern time with the Sun Devils and Sooners, then continues with the Golden Bears and the Crimson Tide at 3:30. Should additional games be necessary, they will begin at 7:00 PM tonight. Tune in to ESPN for the live feed. 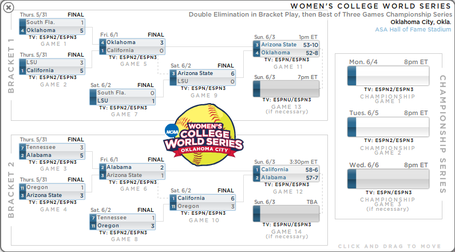