With their dormant offense finally springing to life in yesterday's 6-0 win over LSU, the Arizona State Sun Devils extended their season and championship reign by one more day. The victory sent the Devils into the semifinals and a match-up with perhaps the hottest team in the nation, the No. 4 seeded Oklahoma Sooners.

Did ASU have another against-the-odds win in them?

For a lineup that overcame the nation's leader in ERA a day ago--LSU's Racehele Fico--they'd now face another titanic test in All-American Keilani Ricketts. Ricketts' performance in the NCAA Tournament to this point had been just silly, going a perfect 7-0 with a 0.16 ERA. Yes, 0.16.

But defending champions are able to get the job done regardless of the obstacle, and the Sun Devils did just that in the first inning. Showing great patience at the plate, the team was able to make Ricketts labor, and she struggled to find the strike zone early. Alix Johnson drew a walk, and then Amber Freeman followed that with a single. Struggling first baseman Annie Lockwood then lined a double to the wall in right center, scoring both runners and putting ASU up 2-0. Those runs were the first earned runs Ricketts had allowed in 40 2/3 innings.

The Sooners would get onto the board an inning later. With one out in the second, Katie Norris sent an Escobedo riseball sailing over the centerfield wall for a solo home run.

They'd then break the game open in the third with a half inning that will haunt the Sun Devils all offseason long.

A pair of singles put runners on for Ricketts, who dropped a blooper just past the reach of second baseman Sam Parlich. Jessica Schults then lined a shot to right field, and a diving effort by Johnson nearly made the catch, but the ball trickled free and two runs scored. ASU appeared to stop the bleeding when Norris popped to third, but Haley Steele lost the ball in the sun and it fell to the dirt, plating the fifth Sooner run.

After such a disappointing turn of events, many teams would fold, but not ASU. A pair of singles and a wild pitch set the table for Katelyn Boyd, who grounded into a fielder's choice that scored Elizabeth Caporuscio to trim the lead to 5-3.

But Ricketts was able to hold back the Sun Devil rallies over the last three innings.

In the fifth, she pitched out of a jam with two runners on. An inning later, Talor Haro was in scoring position for both Boyd and Johnson but neither could get her in. Ricketts pitched around Steele's leadoff single in the seventh to strike out the next three Sun Devils to secure the victory. On the day, she struck out 13 Sun Devils.

The top three in the Sun Devil order--Boyd, Johnson and Steele--were just a combined 1-for-11 in the game.

Oklahoma now moves on to the championship series, and the Sun Devil season and title reign is over. Despite the sad ending, it was another fantastic season by the Sun Devils and head coach Clint Myers, and we at House of Sparky tip our caps to this great group of ladies. 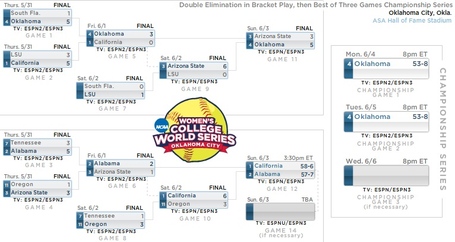