The Arizona State Sun Devils are the champions of NCAA Division I softball. Well, at least for a few more days.

ASU made a great run in the 2012 NCAA Tournament, escaping the clutches of elimination in both the Tempe and Super Regional rounds to reach the school's 10th ever trip to the Women's College World Series.

A win over Oregon sent them to a match-up against Alabama, but the Sun Devil offense fell silent against the Crimson Tide and pitcher Jackie Traina. Sent to the loser's bracket, ASU thumped LSU to set up a semifinal battle against Oklahoma and National Player of the Year Keilani Ricketts. However, the title reign end as the Sun Devils found themselves on the wrong end of 13 Rickett's strikeouts and a 5-3 score.

That sets up the two teams to defeat ASU in the finals.

The Oklahoma Sooners and Alabama Crimson Tide will meet in a best-of-three series to determine who will succeed Arizona State as national champions. The details: 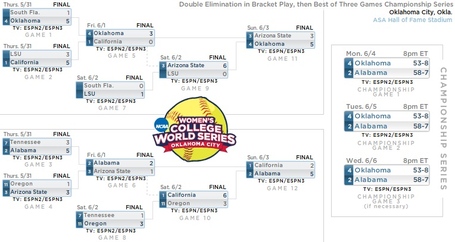