For much of the last 15 years, the Arizona State offense has been built on the passing game, shredding defenses through the air thanks to the arms of Andrew Walter, Rudy Carpenter and Brock Osweiler. Throughout the school's history, receivers like John Jefferson, Derek Hagan and Shaun McDonald were just a small sampling of the bevy of talented pass catchers that wore the maroon and gold.

But it wasn't always like this, of course. For most of it's existence, football was a game built on the run, and dynamic passing games were found few and far between, if at all. From 1946 to 1969, the Sun Devils' leading receiver never topped the 816 yards of Calvin Demery in 1969. In 18 of those seasons, the leader failed to eclipse the 500-yard mark.

So there is the context within which the Sun Devil offense operated. Run, run, run and run some more.

But as the game evolved, so did Kush. When he had special talents, he utilized those. In 1964, he had a good quarterback in John Torok, and he shattered the existing passing records, becoming the first Sun Devil to top 2,000 yards (2,356) and reach 20 touchdown passes. That season was one of just three in Kush's 22 seasons at ASU in which the team passed for more years than it ran.

Another special player entered the fold in 1967 in the form of wide receiver J.D. Hill who would go on to great things during a magical year.

One of the greatest athletes to ever attend ASU, Hill also was a standout performer on the track and baseball teams as well as on the football field. He was a solid contributor as a wide receiver and punt returner for his first two seasons, but ran afoul of team rules and did not play in 1969.

Refocused, he returned in 1970 to play a vital role in one of the greatest teams in Sun Devils history. He formed a potent 1-2 combination with quarterback Joe Spagnola. That season, the Sun Devils aired it more times than they had ever done in their history, 299 times to be exact. This success was all the more remarkable considering the team also ran for 3,288 yards.

This potent attack spearheaded ASU to an 10-0 record and a berth in the 1970 Peach Bowl against North Carolina, the Sun Devils' first bowl trip since the 1951 Salad Bowl.

In the second quarter, Hill, using his amazing speed, caught a 67-yard touchdown that gave ASU a 21-7 lead. The pass also put him over the coveted 1,000 yard mark, becoming the first Sun Devil to do so. UNC rallied to post 26 points in the second quarter, but in the raging snow storm in the second half, ASU scored 27 straight to win 48-26. That win gave the Devils a perfect 11-0 mark and a final No. 6 ranking in the AP Poll. 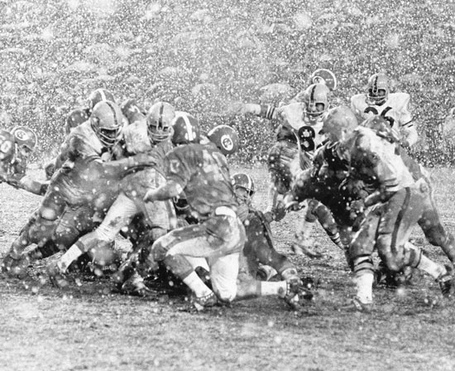 How much fun must it have been to play in that blizzard? (Photo: ASU)

After his 61 reception, 1,009 yard, 11 touchdown season, Hill would then go on to be drafted by the Buffalo Bills fourth overall in the 1971 draft, the second-highest a Sun Devil had been taken (Charley Taylor by Washington, 3rd overall 1964), but he'll also hold the distinction of being the Sun Devils' first 1,000 yarder.

Hear J.D. Hill talk about that magical year on his recent Speak of the Devils show appearance.

See all the previous entries on House of Sparky's 100 day football countdown here.