"It has a special place in his heart seeing me running out of Tillman Tunnel, wearing his number, playing his position, all on the same field he once dominated on"

For some poople, the only thing stronger than the bond to their alma mater is that of family. Then there are those who have the good fortune to have those two loves converge to create a cherished connection and legacy.

Over the decades, the Arizona State football program has featured it's share of family ties that have donned the maroon and gold. The Miller, Kush and Malone families are among that group, and there is little argument over the fact that the White family of father Wilford and son Danny--both members of ASU's Ring of Honor--would be classified as the "first family" of Sun Devil football.

While other Sun Devil legacies may have greater notoriety or places in the school's record books, the Caldwell family may be unmatched in their ongoing love for Arizona State and Sun Devil football.

The on-field legacy formed it's foundation when Bryan Caldwell lined up at defensive end for ASU from 1978-1982. A fearsome presence along the line, Caldwell's play stood out on a defense loaded with legends like Jim Jeffcoat, Vernon Maxwell and Mike Richardson. In 1982, he tied for the team lead in tackles-for-loss with eight and earned second-team All-Pac-10 honors. The following April, he was a third round pick of the Dallas Cowboys.

That career in itself would have made for an outstanding contribution to ASU by the Caldwell name. Opposing Pac-10 offenses may have been relieved not to have to face the maroon and gold No. 50 anymore, but their relief would soon come to an end. Twenty years later, their troubles began again with the next generation.

Following his time in Tempe, Bryan and Kitch Baldwin--herself an elite swimmer while at Arizona State--had a son who they named Kyle. Growing up in that household instilled not just a sense of gridiron tradition in young Kyle, but an overall appreciation of what being a Sun Devil meant.

"Growing up with a father who had such a great football background really taught me at a young age what the game was all about. Hearing all of his stories about Coach Kush and the feared defenses he played on during his career at ASU had me loving the toughness of the sport before a lot of kids even know how to properly put their hand in the ground. Yet, growing up in my household wasn't just about Arizona State Football, but rather the understanding of what it was to be a Sun Devil athlete all around."

By 2002, Kyle had developed into a dominant defensive force at Saguaro High School, earning several state Player of the Year awards as a senior. This led to offers from several major powers in college football, and while it may have been tempting to push his son to follow in his footsteps, Bryan ultimately took a hands off approach.

"I made sure my son knew how important it was for me to be a Sun Devil and to play for Frank Kush. I did not want to steer him one way or the other. Only to let him know how great of an experience it was for me."

Kyle appreciated his father's insight, and in the end, continuing the Caldwell legacy at ASU in front of friends and family was too much too pass up.

"My father never pushed me in any one direction but always was there to guide me. His answers to my questions about all the small things that go into the big picture really helped since he had once walked in the same shoes. In the end, I would have to say my family and friends being here in the Valley is what I loved most about choosing ASU." 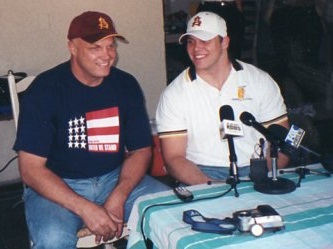 Kyle's freshman year in 2003 allowed him the rare opportunity to follow in his father's footsteps while also forging his own path. It was a feeling that Bryan will never forget.

"It was an amazing experience. Seeing your son wear the same uniform that you wore and the same number was surreal, and a moment not many fathers will get to experience. I felt blessed that Kyle was coming out of the tunnel and getting a chance to experience some of the things I did as a Sun Devil." 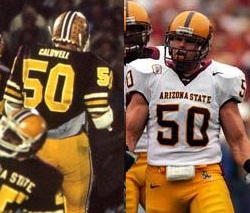 Kyle went on to have a solid Sun Devil career, being named to The Sporting News' All-Freshman team in 2003, tying for the team lead in sacks as a sophomore, being named a team captain in 2006, and earning honorable mention All-Pac-10 honors as a senior. But beyond any on-field production, it was the strengthening of the father-son bond that has had the most lasting impact.

"It has made it clear for the both of us what it is to be a Sun Devil. It made the family even prouder to be part of ASU football. Memories that we shall have for the rest of or lives," said Bryan.

With such a strong connection between a family and a program, the two No. 50s are in agreement that two is not enough.

"I was very proud to be a Sun Devil and the memories and relationships made as a player there were life lasting. I am still proud and am so glad Kyle got the great experiences of Camp Tontozona and playing in Sun Devil Stadium like I did. Now we're waiting for a third generation Caldwell to do the same."

Added Kyle, "For myself, being a second generation Sun Devil is something I wear on my sleeve and sharing my passion with others for our great University is an easy choice. Hopefully, in the future we get to bless you all with a third generation and keep the Caldwell passion flowing through the program."

So that's more than fair warning to the rest of the Pac-12. Sometime in the 2030s or so, your quarterback better watch out for that No. 50 coming around off the edge.