Arizona State Gets Tebowed In 2012

Share All sharing options for: Arizona State Gets Tebowed In 2012

One of the landmark days of the college football offseason is the release date of the new EA Sports' NCAA Football game. It's a day that thousands of gamers celebrate with fabricated sick days and marathon sessions. This year's entry has already got the seal of approval from SB Nation's own Spencer Hall, and contains an intriguing new feature. NCAA '13 allows players to add a past Heisman Trophy winner onto any current team.

Our friends at EA Sports asked us to do a post speculating on which Heisman winner we'd want on ASU. Initially, my mind went to Barry Sanders in maroon and gold. Hard to argue against the greatest running back at either the college or pro level. But in talking with fellow House of Sparky editor Cory Williams, he brought to the table a much better idea...

Tim Tebow to the Devils.

I can taste the irony.

So with the magic of NCAA '13 and Cory's Playstation 3, we bring you the divisive tale of ASU getting Tebowed in 2012. Cory simulates the season after the jump.

Cory: We mulled the options. Could Carson Palmer lead this ASU team to the promised land? Would RGIII be a good fit in the desert? At the end of the day, everyone that won a Heisman was an amazing talent that would make the Sun Devils a better team.

Despite Brad's irrational hatred of Tim Tebow, he is by far the best choice for Todd Graham's offensive style. Tebow is what we hope Michael Eubank will become ... in our wildest dreams. There's no way to get around it, Tim Tebow's dual-threat ability was unmatched in college football and would make the Sun Devils an instant contender. 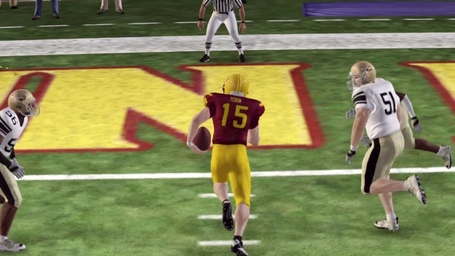 While Barry Sanders was high on our list, we already have a loaded backfield. Tebow is our man, and his crusade to bring a title to Tempe begins now. The time had come to drop Tim Tebow into the ASU offense and see what magic Todd Graham and company could unfurl in the Pac-12 South.

Northern Arizona: ASU wins, 52-6: Tebow went 21 of 32 for 374 yards and five touchdowns. He also had a huge day on the ground, adding 98 yards and a touchdown in the running game. Hell of a start for Tebow.

Illinois: ASU romps the Illini, 52-28: Tebow was 23 of 32 for 276 yards and three touchdowns and one interception. He only picked up 39 yards on 14 rushing attempts, but did add two more touchdowns on the ground. It's worth mentioning that Cameron Marshall had a monster game, rushing for 111 yards.

at Missouri: The Sun Devils take care of business, 49-24: This is starting to get ridiculous. Tebow was 18 of 30, 241 yards, 5 touchdown passes, 1 interception. 92 rushing yards, two rushing touchdowns.

at Arizona: 29-27 loss: This was BRUTAL. With the win, Arizona moved to a terrible 4-8 on the season, although Tebow played well. 15 of 21, 231 yards three touchdowns and 76 yards and another score on the ground.

In the Heisman voting, Tebow finished in second place with 1522 points. He barely lost to Georgia running back Isaiah Crowell who won the Heisman with 1543 points (yes, in real life, Crowell is now at Alabama State). Tebow did win the Maxwell, Davey O'Brien and Walter Camp Awards to make up for the Heisman loss.

In a disappointing turn of events, the 9-3 Devils ended up in the Holiday Bowl against a 6-6 Texas Longhorns team. ASU didn't feel motivated and lost handily, 41-20. It feels like 2007 all over again. Oh, and Utah won the national championship, beating TCU 44-21 and earning a 14-0 record on the season.

Brad: So yeah...here we have Timothy Tebow completing 226 of his 339 passes (ironically a completion percentage of 66.6%) for 3,248 yards, 41 touchdown passes, just five interceptions, while running for 767 yards and another 11 touchdowns. All the while leading a 9-4 ASU team.

Well, that's why they are video games.

As Cory alluded to, I do hate Tim Tebow. As a die hard Steeler fan, you can infer as to why. Yet, there is no denying he was a great college player before he became a miserable, good for nothing pro "quarterback".

However, I don't think the fine folks at EA Sports factored in the corruption factor. Could Tebow perform as well as he did in the NCAA '13 simulation, given the...let's say, distractions present on ASU's campus? Hmm...

Now that is research I'm sure a number of EA developers would volunteer for.

This post was sponsored by EA Sports NCAA Football 13. Check out the video for the game below.