Back in April, Arizona State unveiled the initial plans and renderings of the proposed renovations to Sun Devil Stadium. This has been rumored to be the centerpiece of a larger sports and commercial complex for the area, with the cost rumored to be in the neighborhood of $300-million.

Once completed in 2017, the home of Sun Devil football will be among the most impressive in the nation. Yet, as to be expected, the initial homes of the program were a tad less glamorous.

Starting with the team's first season in 1897, Tempe Normal School, as it was known then, played 17 seasons of varsity football through 1926, calling the small "Normal Field" home. With the school earning accreditation as a four-year institute in 1925, a larger home field for the football team was needed.

That came in 1927, when Irish Field--so named after Fred Irish, who coached the team for the first eight seasons--was constructed on the current location of the Memorial Union. Three years later, the first stadium lighting was installed, given the fans seated on the wooden bleachers the option of night games.

During the nine seasons calling Irish Field home, the team posted a 15-13-1 record (.535). But as the school grew, so did the needs for a bigger venue.

In 1936, Goodwin Stadium (below) was constructed, initially holding 5,000 fans. It was named for Garfield Goodwin, a former Tempe mayor, member of the State Teachers College Board of Education and a wide receiver on the Tempe Normal's 1899 team. 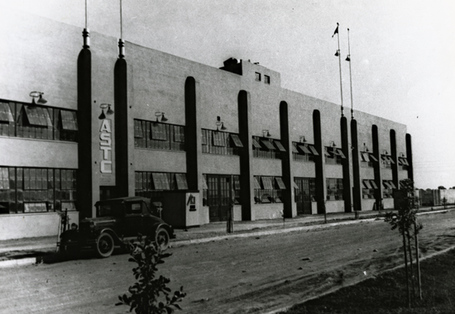 Four years later, Goodwin Stadium saw a capacity increase to 10,000 fans, and a year later, another 5,000 seats were added.

The team saw much greater success at Goodwin Stadium than at their previous home. With all-time greats like Bobby Mulgado and Wilford White leading the way, the team posted a very good 66-38-6 record over the 23-season lifetime of Goodwin.

With the opening of Sun Devil Stadium in 1958, Goodwin Stadium no longer saw action at the collegiate level, although Tempe High School played there until 1969. However, the structure housed a men's dorm on it's east side, which was taken down in 1978, two years after the west side fell.