3rd And Short: ASU Looking To Get Back To Short Yardage Success

Share All sharing options for: 3rd And Short: ASU Looking To Get Back To Short Yardage Success

Last season, Arizona State threw the ball 527 times, second only to 2002's 558 attempts in school history. While those passes did generate 4,117 yards--the third highest total in ASU history--Mazzone's play calling drew the ire of many fans.

One complaint was the over-reliance on the swing pass. While the play had some successes when targeted for Jamal Miles, the Sun Devils often would run the same play a dozen or more times per game, and as the season progressed, it garnered diminishing returns.

However, a more specific complaint than than the redundant nature of the offense was the play calling and conversions in short yardage situations.

Here is how the Sun Devils performed in 2011 in downs with two or less yards to go, including goal line situations: 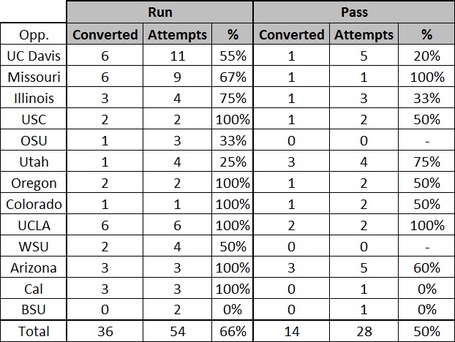 Those figures tell a few tales.

First off, the popular notion of ASU throwing the ball in every short yardage situation is dispelled, as the Sun Devils ran the ball nearly two-thirds of the time.

Second and most importantly, the Sun Devils were much more successful on the ground than through the air...but still not overwhelmingly so.

There are a few factors in this less-than-stellar rate.

ASU's offensive line was geared much more towards the pass-blocking they used with greater regularity. Deantre Lewis' season-ending injury severely limited the backfield depth. While Cameron Marshall carried the load successfully when he had his number called, he had little effective short-yardage help. Lastly, the team's playbook of run plays was small.

Quarterback Mike Bercovici told me that the team had "roughly three run plays last year, which mainly consisted of inside zone". Running the same small set of running plays will allow opponents to prepare better to stop it, and that's exactly what happened. Over the first nine games, ASU averaged 4.2 yards-per-carry. Over the last four, that average dropped nearly a full yard to just 3.3, and only the game against Cal posted an average higher than 2.8.

This season, the new offense of coordinator Mike Norvell will reestablish the run, due in part to a wider variety of plays.

"I feel like our run game is going to be a lot more dominant this year. I feel like that's where we are going to make our biggest strides, picking up first down with the run game," said Bercovici. To that end, ASU will employ "up to 10 plays with counter, power, stretch, read stretch and read zone."

Running back James Morrison, the 213-pound senior who earned the nickname "Tank" from Coach Graham during spring ball echoes that sentiment.

"We have a lot of packages that we've put in during the spring. We still have a lot of shotgun offense, but there are a lot of times we get down under center. We have a lot of different run schemes in there to power the ball down their throat. If there's short yardage, we'll be sure to run in those situations."

Arizona State should also have personnel better suited to this task.

As Morrison mentioned, the team has more power packages than before, with tight ends being more of a factor, such as newcomer Darwin Rogers, a 240-pounder who is known for his blocking ability.

In terms of ball carriers, the team will have several options. Marshall, one of the top backs in the nation, will be the primary option. Morrison's great improvements have put him in the mix, and newcomer Marion Grice is a heralded juco prospect who brings power at 215 pounds. The team can also run quarterback Michael Eubank, who is a bullish, Cam Newton-like runner at 6'5", 242 pounds.

Regardless of who has the ball, Morrison is confident in this year's group to convert those short yardage situations.

"Hopefully, the 'Tank' is leading the way, but we have confidence in any of our backs to get the job done."