Share All sharing options for: The Underrated Files #3: Bob Kohrs

"I wanted to be a Sun Devil. It was a name that was associated with greatness."

That potential to be a "hometown hero" does carry with it a certain allure that is hard to pass up for a local recruit. It stands to reason that the local university would have some degree of an advantage for the prospects in "their own backyard".

When that university also happens to have compiled a 66-16 over the previous seven season leading up to the player's recruitment, that offer can be impossible to pass up.

Such was the case with Bob Kohrs.

Kohrs had a terrific career with Brophy High School in Phoenix both as a defensive end and kicker. When it came time to take his game to the next level, his choice was clear. After having a close-up view to the excellence that Frank Kush's Sun Devils were producing annually, he had to be a part of the maroon-and-gold tradition.

Coming to Tempe in 1976, Kohrs battled his way into the starting lineup at right defensive end by 1977. Once entrenched, he formed a supremely potent pass rushing tandem with the legendary Al Harris. The pass rushing skills brought by Kohrs helped to pave the way for Harris to amass a staggering 24 tackles for loss that season.

But that was nothing compared to what that dynamic duo accomplished in 1978.

While Harris was on his way to the first unanimous All-American season by a Sun Devil, Kohrs was posting an All-American-caliber year of his own.

1978 was the first season that ASU kept track of sacks, and that timing was perfect. While Harris racked up 19 sacks, Kohrs delivered 14 oh his own, still to this day the third highest single season total ever by a Sun Devil. Not just a threat to quarterbacks, Kohrs also made a fantastic 20 tackles-for-loss that year. Yet oddly, perhaps cast into the voting shadows by Harris' brilliance, Kohrs did not even make the All-Pac-10 team.

The next season, Kohrs continued his dominance despite Harris' departure. Now a team captain, he notched another eight sacks while upping his tackles-for-loss count to 22. This time, that production was too much to ignore, and Kohrs was named to the All-Pac-10 team at defensive end, and earned a second-team All-American nod from The Football News and a third-team All-American spot by the AP.

The following April, the 6'3", 240 pounder was drafted by the Pittsburgh Steelers in the second round and played five years in the NFL.

Now 35 years later, his name sadly doesn't carry the resonance in the minds of fans that other standout ASU defensive linemen like Harris, Terrell Suggs or Jim Jeffcoat have, but his production continues to stand with them.

His 58 career tackles for loss are still the second most in school history--behind Suggs' 65.5--and his 22 career sacks are still the sixth highest total, despite the stat only being tracked for his final two seasons.

Regardless of which measure, quantitative or qualitative, you use, the result is the same. Bob Kohrs was one of the greatest defensive players in Sun Devil history. 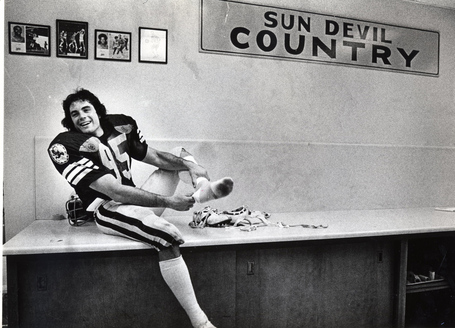