There are many cherished artifacts and traditions surrounding Arizona State football. Perhaps the oldest, at least in terms of it's physical origin, is the beloved Victory Bell which now stands outside the southeast entrance of Sun Devil Stadium.

Today, it is generally believed that the bell originated from Michigan. It ended up in Arizona courtesy of the Sante Fe Railroad around 1879, on one of it's trips to Winslow.

The bell, weighing more than a ton, came into the possession of Arizona State's student body in the late 1960s. Judge Ross F. Jones was generous enough to bestow the bell to the Sun Devils, and it's been a part of the lore ever since.

Prior to it's current spot outside the stadium, where it's rung before games and--predictably enough--after victories, it's been both mobile (as seen below) and installed at the Memorial Union. 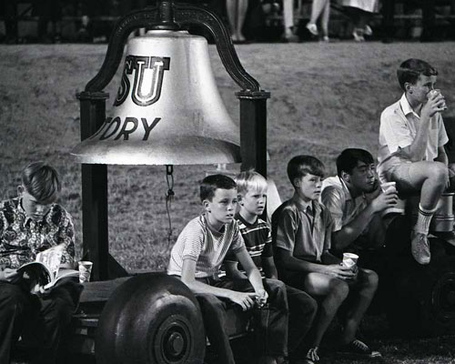