His career numbers are pretty good: 8,827 yards and 65 passing touchdowns, both good enough for third in school history. He was accurate, but not tremendously so, as he never completed more than 58% of his passes in a season. He never threw for 3,000 yards or 25 touchdowns in a year. At a lanky 6-foot-2, he didn't have the "look" of a legendary quarterback.

All legends take time to develop, and Jake Plummer's greatness wasn't immediately apparent, at least to his teammates.

"I remember in 1993, right before camp, we were shooting the breeze with (then ASU quarterbacks coach) Bobby Petrino," said Juan Roque, the eventual All-American left tackle protecting Plummer's blind side. "He said 'We're bringing in this kid from Idaho, and I'll tell you what, he'll be starting by the end of the year,"

Roque and many of his teammates scoffed at that notion. But soon enough, they were converted into believers.

"This geeky kid comes out of the car, skinny and looking like Shaggy from Scooby Doo from potato country, we didn't take him too seriously. When we go into that Utah game a few weeks later, he threw that bomb to Carlos Artis, you were like 'Wow. This kid can play.'"

Soone enough, Plummer was the team's starter, getting the nod in Week 6 against Oregon. Over the final six games with "The Snake" at the helm, ASU went 4-2, and his amazing playmaking ability was beginning to develop.

"Our relationship developed out of hatred, because at first I didn't like him," said Roque. "But as I got to know him and started blocking for him, you knew he was a special player. He had the ability to make something happen whenever he had that football."

But the next two years were not all highlight reel plays and success. The 1994 ASU team stumbled it's way into a terrible 3-8 record, the fewest wins the program had had in a season since 1946. Plummer was solid, though, throwing for 2,179 yards and a positive 15-9 touchdown-to-interception ratio.

Things began to pick up in 1995. Plummer was named to the All-Pac-10 team in leading the Sun Devils to a 6-6 record. Solid, but nowhere near what the group or Plummer was capable of producing.

He threw three touchdowns in the thrilling opening night win against Washington, and went for another trio in the easy win over North Texas. That was all well and good, but surely he wouldn't be able to find success against the No. 1 team in the nation, and the two-time defending national champion Nebraska Huskers, right?

Wrong. Plummer made key play after key play en route to throwing for 292 yards on the Blackshirts and helping lead the historic 19-0 win.

The great moments during that run were almost too numerous to count. His critical touchdown reception against UCLA. His four touchdown passes against Oregon. And of course, he led the 56-14 throttling of Arizona.

As Plummer led win after win, his national profile grew. Suddenly, the Sun Devils had a Pac-10 Championship, a Rose Bowl berth and a Heisman finalist. Not bad for a "Shaggy" look-a-like.

But Jake's signature moment was still to come.

On the biggest stage in the game, Plummer found himself running onto the field, with his team down 14-10 with just about four minutes left in the game. On the line? A Rose Bowl win and national championship.

What Plummer engineered was one of the most legendary drives in Sun Devil history (watch it here). He came to define the term "clutch". He lofted a perfect pass to convert a fourth and four. And when he broke free on one of his patented scrambles and dove into the end zone for the touchdown...his legend was secured. 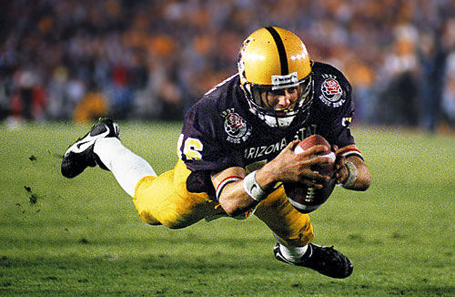 The let down by the defense on the ensuing drive can not diminish what "The Snake" did then, and has meant since, for ASU football. If there was a Mount Rushmore for the Sun Devils, his face would be etched in stone.

Plummer was inducted into the ASU Hall of Fame in 2007, but perhaps the greatest testament to his greatness was the impact he made on his teammates, especially Roque.

"Playing with a guy like 'Snake' is something you'll talk about 'til the end of your days. To this day, I'm honored and humbled that I got to block for Jake Plummer."