So far on our 100-Day Sun Devil Countdown to Kickoff, we've covered 94 reasons why you should love Sun Devil football. Unsurprisingly, many of them have to do with the Arizona Wildcats.

From "The Run" and "The Catch" to Terry Richardson's amazing punt return touchdown, to the unbelievable 2010 double-overtime game that produced three entries: Thomas Weber's redemption, the jump huddle from Brock Osweiler and of course James Brooks' block party, the annual game against U of A is simply the most important stage on which Sun Devil sports performs

It all began with the inaugural clash between the teams way back in 1899. In front of 300 fans, Tempe Normal defeated Arizona 11-2 and took home the Territorial Cup.

Since that first game, the two teams have battled 84 more times, with the current record standing—unfortunately—in the Wildcats' favor at 47-37-1. That was heavily influenced by the early years, when the Wildcats claimed 20 of the 21 games from 1902 through 1948.

When these two team's meet on the field, throw the records out of the window. The game morphs from a football game to a brutal war for control of the state. These teams hate each other...as they should. 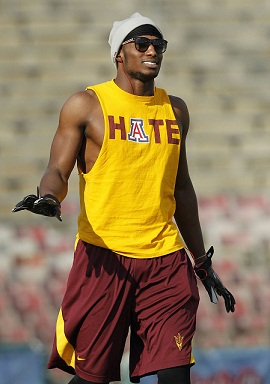 Gerell Robinson's shirt says it all

We can't wait until November 23rd, when the Sun Devils reclaim the Cup.