If you ask any Arizona State fan who their five most hated teams are, chances are the first four slots will be taken by the Arizona Wildcats. Taking up that last spot you'll find the USC Trojans.

Since joining the Pac-10 in 1978, the Sun Devils have battled the Trojans in all but six seasons. Thanks to that now-ended 11-game losing streak, ASU trails 10-18 in the overall series, but their very first meeting was not only memorable, but eventually decided the national championship.

After dominating the WAC throughout the decade, ASU made the move to major college football in 1978 as they joined the former Pac-8. However, their entrance was a little disappointing. In their first conference game, they fell 51-26 to lowly Washington State.

Despite the demoralizing loss, ASU brought a 4-1 record into their October 14th showdown with No. 2 USC. The Trojans were an absolute machine. They had earlier defeated No. 1 Alabama on the road, and sported a 4-0 record. Of their 22 starters, 20 went on to the NFL. Needless to say, the Sun Devils were an heavy underdog.

Did that faze the Sun Devils? It sure seemed that way early, when ASU's Alvin Moore fumbled the opening kickoff, and the Trojans began at the Sun Devil 16-yard line.

On USC's first play, the defense crushed through the Trojan line and dropped Charles White--who would win the Heisman Trophy the following year--for a loss. A missed field goal got ASU out of the early hole and into a defensive battle.

The first half's only points came when Kohrs recovered a Trojan fumble that resulted in a 40-yard field goal from Steve Hicks.

Things began to heat up in the second half, thanks to a raucous ASU crowd.

"When we came on the field in the third quarter --and this is the honest to God's truth--the crowd was so loud that my helmet started vibrating. It was a tremendous adrenaline rush, but it was scary because it felt like the whole stadium was going to come down," said Harris.

Once again, a Kohrs fumble recovery was the catalyst. Thanks to the running skills of quarterback Mark Malone, the Sun Devils scored increased their lead to 10-0 on his one-yard scoring run. 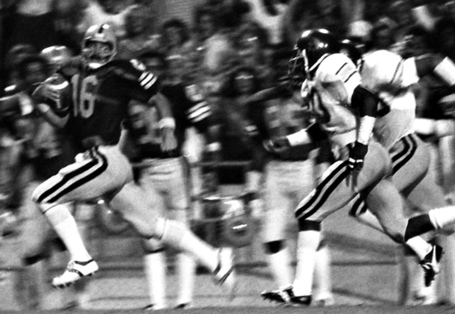 Feeding off the energy of the crowd, the defense again came up huge. Kim Anderson made his second interception of USC quarterback Paul McDonald. Just four plays later, Malone showed off his passing prowess by hitting John Mistler for a 16-yard touchdown and a 17-0 lead that the Devils took into the fourth quarter.

Hicks connected on another field goal in the fourth quarter to extend the lead to 20-0, and the game was no longer in doubt. The Trojans did manage to avoid the shutout with a late McDonald touchdown pass, but really, who cares?

For the game, Kohrs and Malone were the stars. Kohrs managed to recover three fumbles, while Malone racked up 139 yards on the ground and accounted for two touchdowns.

The win helped to further legitimize the Sun Devil as an emerging national power, but the ramifications for USC were far more costly.

Instead of a perfect 13-0 mark, the eventual 12-1 Trojans had to settle for a split national championship with Alabama. The loss was USC's only defeat over a 30-game stretch that ran from 1977 through 1980.