It began with Norris Steverson back in 1934, and continued through this past April when Brock Osweiler and Omar Bolden heard their names called.

For over seven decades, the NFL has seen a steady influx of former Bulldogs and Sun Devils bring their talents to the greatest professional sports league in the world.

Beginning with Steverson, an All-Southern conference running back, and ending with the Denver Broncos selection of Bolden in the fourth round this year, a total 210 Sun Devils have been drafted, and scores of other have earned their way in on free agent deals.

In 1964, Charley Taylor went to the Washington Redskins with the third overall pick, becoming the first Sun Devil taken in the first round. He also remains the highest drafted Sun Devil of all-time, edging out J.D. Hill's fourth overall selection in 1971. Three other Sun Devils--Mike Haynes (fifth, 1976), Al Harris (ninth, 1979) and Gerald Riggs (ninth, 1982)--have been top 10 picks, and a total of 23 players have heard their names called in the first round of NFL Drafts.

With so many players having successful pro careers, 14 of those have distinguished themselves with Pro Bowl selections. It's no surprise that Hall of Famers Randall McDaniel (12 selections) and Mike Haynes (nine) lead the way, but other such as Eric Allen (six), Terrell Suggs (five) and John Jefferson and Darren Woodsone each with four have made plenty of trips to Honolulu.

An even more select group of four Sun Devils have achieved what every NFL player dreams of: enshrinement into the Professional Football Hall of Fame.

Charley Taylor was the first Sun Devil to enter Canton's hallowed Hall in 1984, and three years later John Henry Johnson joined him. A decade later in 1997, Haynes was inducted and the run of former Sun Devils was most recently continued by McDaniel's enshrinement in 2009.

Can reigning NFL Defensive Player of the Year Suggs be the fifth? Will Bolden or Osweiler go down as all-time greats? When will the Sun Devils produce another first rounder? Time will tell, but one thing is for certain.

The NFL has not seen the last Sunday-bound Sun Devil. 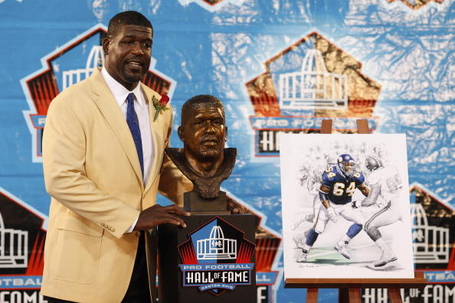