We begin a series chronicling the journey of one of the best and most popular Sun Devils in recent memory as his chases his NFL dream.

On December 29th, Josh Hubner walked off a college football field for the last time. In what is typically a very emotional moment, his thoughts did not take a teary-eyed, retrospective turn like many other players. Instead, he looked only towards the journey ahead.

But before moving forward, Hubner did take a moment to realize the rather unique fashion in which his collegiate career ended.

Thanks to ASU's prolific offensive output in the 62-28 Kraft Fight Hunger Bowl win over Navy, Hubner never got to show off his finely-tuned craft in the finale, and oddity that elicited mixed emotions.

"It was bittersweet," Hubner said. "I wouldn't say that I was disappointed. When your offense is clicking like that and you're having that kind of success, it's hard to be upset when you're not playing."

With college ball now behind him, Hubner then took the next step towards ending his amateur status and pursuing his NFL dream: hiring an agent. Thankfully, he had someone well versed in the subject to help guide him along.

"My uncle used to be in the industry, and he's now a Superior Court justice," said Hubner. "He's the guy I pretty much hand over the reins to him when it comes to those kind of decisions."

Even though he had experienced counsel, the importance of the situation was not lost on Hubner.

"My biggest fear was that I was going to work with somebody dishonest, because there's a lot of guys in that business," Hubner said. "It's a very intricate process. For a lot of these guys, it's a career-long relationship. I wanted to be sure that I could have a relationship with this person, that this person was going to be honest, not sugarcoat much for me, and help me out when I need the help."

Eventually, the critical decision came down to gut instinct.

"My uncle went through a long process. These were guys that he was familiar with and had known for years," said Hubner. "I went with somebody that just felt right. That was the biggest thing for me, just making sure that I went with somebody who was honest and that I could connect with."

With an agent on board, it was time for Hubner, one of the nation's most accomplished punters in 2012, to hit the all-star bowl circuit. First up was a stop down in Tucson, site of his last collegiate punt, for the Casino del Sol All-Star Game. There was just one issue.

"I didn't know we were going to be kicking NFL footballs, and I had never kicked them before," Hubner said. "It's actually a much different ball, and there's a spot that you have to find to hit on it that's different from a college ball." 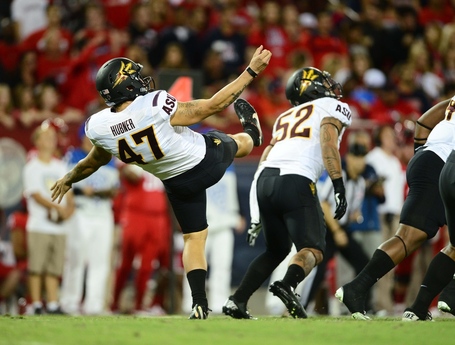 Eventually, Hubner made the adjustment to the NFL ball and had a strong showing that helped build confidence as he embarked for the second, and more important, half of his postseason bowls.

"I felt that I had hit that stride with that football towards the end of that week, which was great heading into the East-West Shrine, because that's a bigger game. I feel like I've got them figured out now."

Hubner and teammate Keelan Johnson flew down to St. Petersburg for the annual East-West Shrine Game, one of the most prominent stops during the evaluation period in the lead up to April's NFL Draft. The difference between the Casino del Sol experience and the Shrine game was immediately clear.

"It was a lot more pressure," Hubner said. "You walk to where all the NFL scouts are at, you get measured. They send you up on stage in front of about 300 NFL scouts in nothing but your compression shorts. You stand up on stage in front of these 300 guys and they yell out your height and weight. You stand there for 30 seconds. It's almost like a meat market. It was a little bit nerve-wracking, but I think at the East-West Shrine, it got a bit better because I had already been through it."

Of course, his hard work, measuring and traveling is all due to Hubner's promising draft stock, which received a major boost with an important and—for his position, anyway—somewhat uncommon distinction.

"I had gone to Lake Tahoe with my girlfriend and a bunch of my friends, and just about 24 hours after my bowl game, I got a Combine invitation," said Hubner of the annual NFL Scouting Combine. "They send you and email and you set everything up through there. It was kind of surreal, because I wasn't necessarily expecting to get that, because there's not a whole lot of punters and kickers that they take. It's awesome and humbling, and I think it will be a really good experience."

Thus far into the process, Hubner has had informal meetings with most NFL teams, in addition to a few more substantial encounters.

"At East-West and Casino Del Sol, I had meetings with 25-30 different NFL teams. They give you the run-around in the interview. They want to know about your family, your past, your football in high school and college, what you've been doing, any off-the-field problems. Stuff like that. They're just getting the feel for the kind of person you are.

"Once you get sit-down interviews. I had sit-down interviews with a couple of teams—the Kansas City Chiefs, Washington Redskins and the Oakland Raiders. It was just a little more in-depth. It's a very delicate and in-depth process for them. They're making an investment."

After his whirlwind tour, Hubner is back in Arizona and enjoying some well deserved relaxation. Well, for a short while, anyway.

"For the next 10 days, I'm not doing anything. I'm going to get light workouts in. I'm not going to kick. I'm not in school. No stress, no nothing for me. I'm just relaxing and getting my legs back underneath me. About three weeks until the Combine, I'll start kicking again and making sure I'm where I need to be."

After his rest, it will be back to training for the Combine and his likely professional future.

"I've been told that I am ‘draftable' by just about every team that I sat down and talked to, Hubner said. "Punting isn't necessarily a glamorous draft pick, but I've been told by numerous teams that it's a pick that they're willing to sacrifice because there's so many bad punting situations in the NFL right now."

But Hubner realizes that the nature of his position does not guarantee hearing his name called in three months, regardless of talent or mastery of the position. Over the last five NFL Drafts, just 10 punters have been selected.

"I would love to (be drafted). Who doesn't want to get drafted? There's big money in that. But it's not uncommon for punters to fall into priority free agency."

"I'm pretty confident that somebody out there is going to need to pick me up."

Check back in a few weeks for Part II of the series, in which Josh makes his final preparations for the Combine and heads to Indianapolis