You don't need to be from Arizona—nor even the United States—to quickly understand the core element in Arizona State's rivalry with the University of Arizona. Just be a part of it once, and the lesson is forever learned.

Winnipeg native Colin Hekle grew up north of the border and earned his stripes playing in the MMJHL, but during his time at Arizona State, he quickly learned that hating, and defeating, the Wildcats is as critical a piece to Sun Devil Hockey as skates and pucks.

This weekend, the UofA travels to Tempe to take on ASU in a critical two-game series for both teams, and this battle comes at exactly the right time for the Sun Devils.

ASU enters this crucial weekend series with renewed momentum after sweeping No. 15 Rhode Island last week by a combined margin of 7-0. This reversed a recent rough patch in which the team posted a pedestrian 6-4 record that was in part due to injury, but also a loss of focus.

"Guys were kind of getting lackadaisical after doing so well," Hekle said. "Having such a big emphasis put on the Penn State and UBC games, we hit those spots and then weren't in the mindset of ‘Hey, we got to keep this going through Nationals. This was the big part of our season, we can let off until Nationals.'"

But as with any great team, the players used those struggles as a wakeup call instead of a reason to let things spiral downward.

"Those losses at the beginning kind of kicked our asses into gear and got us back on track this past weekend."

Wearing the captain's "C" on his sweater carries with it significant leadership expectations and burdens, but when combined with Hekle's status as an elite offensive threat (a team-high 53 points), it can be doubly difficult.

"There's always a little bit more pressure being a captain, but I'm there to not only be the captain but also an offensive threat," said Hekle. "If we're struggling, there's always going to be added pressure on guys like me, Kale (Dolinski), (Dan) Styrna, those type of guys to get that offensive production going. There's always added pressure when the team is slumping and you're a guy that everyone counts on."

During the slump, Hekle made efforts to help his teammates calm down, relax, and find their focus through some off-ice efforts.

"We have a lot of good leaders on the team, but my role is to just get the guys calm," Hekle said. "Guys were panicking a little bit. I got the guys together in team meetings and afterwards a team party to get the guys back on the same page, off each other's throats a little bit, and back to a good locker room atmosphere."

Last week, ASU head coach Greg Powers stressed that his top goal was for the team to regain the "swagger" that had become a staple of the program and its success. With a three-game winning streak in hand, Hekle thinks that that element is on its way back.

"It's in the right direction right now. I don't think we're back to where we were at the start of the season or even through that first semester," said Hekle. "These last two or three wins have given us that so called swagger back, but I think we have a few more steps to get back to where we were." 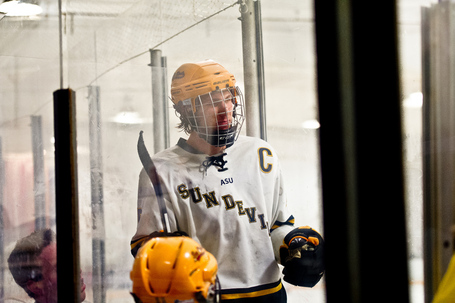 A major reason for this recent success has been the play of Hekle on both ends of the ice. He's scored four goals and assisted on five others over that span, and been effective defensively, thanks to the force and reach of his 6-foot-4, 200-pound frame. Advice from Dad also helps.

"I was trying to figure out what was wrong with my game. I talked to my dad a lot and he gave me a few good pieces of advice on parts of my game that were just mentally off," Hekle said. "That, and playing with (Faiz) Khan and Styrna have been a huge help to me. Having guys that you just click with and mesh with so well makes it that much easier to get out of the slump."

Now that the team is firing on all cylinders, it's time to focus on the task at hand: continuing ASU's 28-game winning streak over Arizona. The Wildcats' last win over ASU came on February 20, 2009, prior to Hekle's tenure, and losing to UofA is not something Hekle is planning on doing. Ever.

"I've never lost to this team and I don't plan to lose during my entire career here. It's something that I don't want to be a captain for the first team in years to lose to them. It's important for me to keep this streak alive for the entire time I'm here, and hopefully the team keeps it going long after I'm gone."

While some players or teams may feel the pressure of such a lengthy—and important—streak, that is not teh case with Hekle's Sun Devils. In place of any hesitation stands a string confidence in their own abilities.

"I don't know if there's any added fear, because we know what we have with this team here," Hekle said. "We're a much better team than UofA is, but you never know. They are fighting for their lives right now for a National bid. They're going to give us everything that they've got. We have to come out equal to the task and play our game. We know we can do it. We just have to stick to our systems and keep our energy up and we'll be fine."

One of the biggest challenges won't come in the skill department, where the Sun Devils hold a decisive edge, but rather in keeping composure and level heads during what has historically been a very hard-fought and often contentious series.

"It's all mental for us. They're going to try to get under our skin and push the limits of what the refs are going to allow," said Hekle. "We just got to keep our heads. The last couple of games we've been getting hit and in little scrums after plays, and taking undisciplined penalties. Things that we don't need to do, and we can't do, to be successful."

Ultimately, Hekle thinks that the keys for running the streak to 30 will be simple: play Sun Devil hockey. But beyond beating their rivals yet again, the Sun Devils are looking to use this series as a springboard to bigger and better things.

"Keep the team in mind. Use this as a stepping stone for where we need to be for Nationals. If we stay mentally strong and don't fall into the stuff after the whistles away from the play, I think we'll be alright."