ASU Football Year in Review: The Uniform Combination of the Year

The Sun Devils continued to roll out new looks, and the divide between traditionalist and the new school widened.

Share All sharing options for: ASU Football Year in Review: The Uniform Combination of the Year

Year Two of the Pitchfork Era of Sun Devils sports continued to display new looks for the football team on the field and fuel plenty of fan debate off of it.

The divide over the change from Sparky to the pitchfork rages on, and the inclusion of black (and to a lesser degree white) into the main color palette continues as strongly as ever. Thankfully, those disagreements were lessened in severity with the team having a successful eight-win season.

In total, the team wore three never-before-seen combinations, and added a new decal to provide a new look for the black and white helmets. This year, all three of the new combinations were excellent, and comprised our group of finalists for this most superfluous of postseason honors.

Second Runner Up - White/White/Maroon vs. Missouri

Being a road uniform, there is but one choice for the jersey, but this simple version helped accent the team's clean, sharp look with a major dash of a traditional color.

The team has often worn black or gold helmets and pants while on the road, and each stands as a poor fit with the white jersey. That is not the case with maroon, as the color is prominently featured on the jersey. The standard white helmet and jersey go very well together, and the maroon pants give a great finish to this look.

The only thing not to like about this combination was the end result of the game. 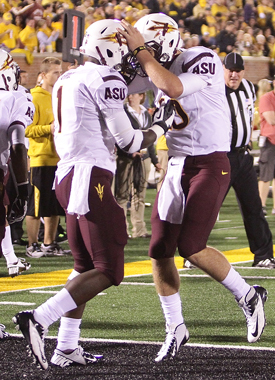 Runner Up - Maroon/Maroon/Gold vs. Utah

A slight tweak of the traditional gold/maroon/gold, the team added the maroon helmet (statistically, the most effective of the four new helmets) on top, and the look was grand. 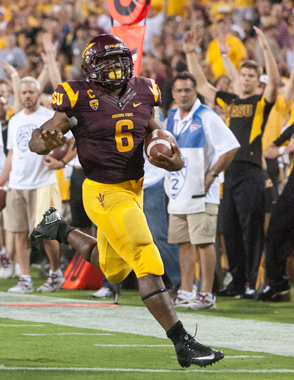 Uniform Combination of the Year - White/Black/White vs. Navy

No, the traditional colors are not present, but that doesn't mean that this look is anything other than awesome.

The team finally made the wise decision to pair the black jersey with the white pants (seriously, what took so long?), but the key was the alterations made to the white helmet.

ASU replaced the usual maroon pitchforks and facemask and replaced them with black, and the complementary look was outstanding.

Most importantly, so too was the end result in the 62-28 win over Navy. 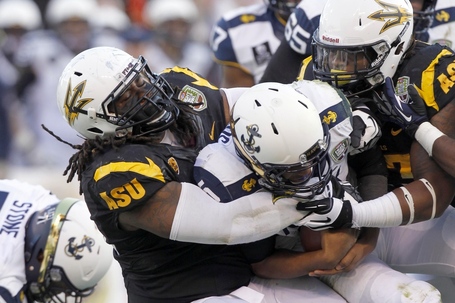 Worst Uniform Combination of the Year - All maroon vs. Illinois

It was hideous last year against USC, and the monochromatic eyesore that is the "Maroon Monsoon" was no better this year against the Fighting Illini.