The Brand of Basketball: How Arizona State and the Pac-12 succeeded in China

Nearly two months before the national spotlight shined on Arizona State in Dallas, the Sun Devil basketball team ventured overseas on a brand-building experience that made the game in Jerry's World seem like public-access television in comparison.

Share All sharing options for: The Brand of Basketball: How Arizona State and the Pac-12 succeeded in China

Language is a funny thing; it can be the bridge that brings us together just as easily as the barrier that keeps us apart.

On a mid-August day, the human language betrayed Rick Shangraw. Fortunately, no feelings were hurt. That is, unless you're a stickler for proper English vernacular.

As he was finalizing preparations for his networking session, he received a text from Arizona State Professor Gerald Zhiyong Lan inquiring what title should be printed on the meeting room sign where Shangraw's event would be held.

Although he owns a fancy title (CEO of the ASU Foundation), Shangraw is a simple man. In reply, Shangraw said "Just tell them to put Arizona State University; that should be fine."

Or at least, that's what Shangraw thought before he arrived at the Beijing hotel. When he found the room where he'd be hosting his intercontinental powwow, this sign was printed at the entrance to greet him: 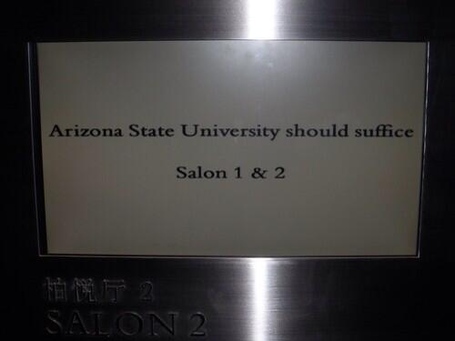 "I think [Professor Lan] went back and translating that back to Chinese said, ‘Well, Arizona State should suffice, that's all we need,'" said Shangraw with a reminiscent chuckle. "And they put exactly that on the sign."

Perhaps it was then that Shangraw realized how fortunate he was to be accompanied by a roster's worth of towering translators to relate the university's brand to the Chinese fans. Only these gentlemen couldn't speak a lick of the local dialect. Instead, they simply got their message across through the squeak of their sneakers on a hardwood floor and the rhythmic hypnotism of a dribbling basketball.

See, Herb Sendek and his Arizona State Sun Devils knew precisely what they were getting into when they volunteered to be part of the Pac-12's latest Global Initiative tour across China.

For 10 days in August, they'd be fully immersed in a culture as unfamiliar as a 24-second shot clock. From their practice center to the airport, then across four cities in China and back to Tempe, they'd be treated to 38 separate bus rides. Some were as short as 12 miles but none lasted less than an hour as the team fought through traffic that made a L.A. highway look like an oversized HOV lane.

At this point, you're probably wondering: why was Arizona State so eager to raise its hand when the Pac-12 came calling?

Well, how's this for a soothing statistic: an estimated 300 million people in China play basketball. That number is just 13.9 million short of the entire population of the United States of America. So, it shouldn't come as much of a surprise that the sport of basketball can convey a message when the spoken word falls short.

"You can communicate with them by using basketball terms and analogies and they get it pretty well," said Shangraw. "I think basketball in some respects is that universal language in terms of at least being able to make that connection with the Chinese students."

And connecting with Chinese students is the name of the game for a "global university" such as Arizona State. According to a conference report, Chinese students are the fastest growing demographic of applicants to Pac-12 universities. That's why Shangraw, along with others such as ASU Senior Vice President and Secretary Christine Wilkinson, jumped on the opportunity to tag along once the team received conference approval.

Then again, China is hardly uncharted territory for Arizona State. The university has had an extension of the W.P. Carey School in Shanghai since 2003. ASU's Executive MBA program in China has enrolled a number of the country's primary government and corporate leaders, according to Wilkinson.

With their foot already in the door, university decision-makers wasted no time mapping out their brand-building plan of attack.

"Having the basketball team over there added a whole another dimension to our presence in China," Shangraw said. "As soon as I found out we were going to have the trip, I was involved in how do we sort out these other dimensions"

According to Shangraw, Arizona State took a more "holistic" approach to overseas interactions than most other Pac-12 universities would have. ASU set up events in key high schools in which they've had success in academic recruiting. And with alumni chapters in both Beijing and Shanghai, there were no shortage of Sun Devil get-togethers from Aug. 9-19.

On the basketball side, the university went all out in their promoting efforts for the team's four-game circuit. While Shangraw's No. 1 objective was continuing to attract Chinese students, he couldn't deny the power of good old fashioned five-on-five.

"Getting that athletics piece in place was just really capping out that complete view of how you interact with countries overseas," said Shangraw.

Shangraw added that basketball allowed the Chinese population to "see the ASU brand in more of a general context." But if you heard it from Wilkinson's perspective, you'd think Shangraw meant "general awe."

Wilkinson recalls a particular sequence in Beijing's famous Tiananmen Square in which the Sun Devil players were incidentally transformed into ambassadors with one step off the bus. Thousands of people were going about their business in the capital's expansive center until a series of Sun Devils began to soar above the crowd as they emptied out of their ride one-by-one.

And then, before a single player could even register where they were, the team was struck with a wave of admiration.

As a crowd gathered, questions were propelled at the athletes with thoughtful precision.

"Are you an NBA team?" "Are you professional athletes?" "Where are you from?" "Will you take a picture with my family?"

In hopes of subduing the endless requests, Wilkinson said the Sun Devils posed in a semi-circle, team photo-style for several minutes while allowing the flashes to fire away. But even when the players attempted to finally work their way across the square, they'd only get a few feet before they were stopped again by a newfound fan.

"That kind of happened most every city they were in," said Wilkinson. "And the [student-athletes] were gracious at every step."

While ASU's three-time interim athletic director was undoubtedly proud of her players, Wilkinson also recognized their behavior as a reflection of fine coaching. She commended Sendek and his staff for establishing "a particular standard they wanted the students to represent the university by."

Maybe it was the height factor or maybe it was the players' unflinching generosity, but amidst all the chaos, Wilkinson was the only one who realized the true rarity in Tiananmen Square: a knowledgeable, well-rounded coaching cotangent.

Despite China's well-documented infatuation with basketball, the coaches in charge of many of their programs are still learning on the job.

For the nine days before Arizona State arrived in China, this trio gave guidance to approximately 150 Chinese coaches with the assistance of a translator. The coaches in attendance ranged everywhere from club teams and Division I, II and III colleges all the way down to the high school level.

Pac-12 Senior Associate Commissioner Gloria Nevarez was in charge of setting up this clinic as well as Arizona State's trip and the Cal women's basketball tour that followed shortly after. Nevarez reached out to the Chinese coaches early in her planning process to ask what they wanted to learn. The feedback was overwhelming.

"They wanted basic offense and defense, how to attack the man-to-man, how they should run practice...how they should keep guys up and moving and when to give them breaks," said Nevarez, rattling off a list.

The most shocking development came when a few of the coaches who reached out to her admitted they ran their operations solo without a single assistant coach.

"It was really educational for them to hear DeCuire's role and how assistant coaches are used in practice," said Nevarez.

Without so many basic building blocks, it's no wonder China operates primarily on a club team model. But according to Nevarez, they're looking to change that real soon.

"[The camp] was really about them wanting the information that has created our academic system of collegiate sport as they try to develop theirs," Nevarez said. "I think China is really committed to developing a model where the universities are the strong teams."

As for the future of the Pac-12's globalization initiative, the conference plans to continue fortifying the basketball foundation of their Chinese counterparts with no immediate end in sight. Since the initiative began in 2011, the conference has sent three basketball teams and the Pac-12's All-Star volleyball team on tours through China. Likewise, they've hosted Chinese volleyball teams and Chinese delegates (the equivalent of American athletic directors) on multiple occasions.

Yet the real question on many a mind remains "but what about football?" Pac-12 commissioner Larry Scott hasn't been shy about vocalizing his desire to play a Pac-12 pigskin game in China since he first established his revolutionary athletics exchange program.

Unfortunately, that pipe dream just doesn't seem feasible at the moment as Nevarez reiterates that the idea is still "more long term."

"Football requires a different level of NCAA waivers and travel challenges," Nevarez said. "While I know it's still on the radar, I don't think it's something we'll be able to pull off next year."

In the good news department, the conference is considerably more optimistic about a few regular season basketball games in China in the immediate future. As Nevarez points out, Oregon is already taking on Georgetown in South Korea for their Nov. 8 season opener so it seems the precedent has been set. Pac-12 VP of Public Affairs Erik Hardenbergh also added that any future regular season Pac-12 basketball game in China would "probably" be of the non-conference variety.

"It's easier to do under the bylaws of basketball from an NCAA perspective so I think it's something you'll see the Pac-12 work on pretty soon," said Nevarez.

But it's those same bylaws that are "disappointing" Arizona State's Shangraw for an entirely different reason.

In accordance with college basketball regulations, programs are only allowed to have overseas tours once every four years. If Shangraw had his way, he'd have the team going far more frequent.

"I think we would take that opportunity, if not every summer, every other summer," said Shangraw. "When that opportunity comes again, I'm sure you're going to see us jumping on it."

And when the Sun Devils inevitably go back, Shangraw will be once again greeted with blank faces when asked where he's from. Then he'll remember that every "Phoenix" must be followed up with a "Suns" to speak the native tongue.

For more on Arizona State's trip to China, follow this link for an exclusive video.