The Sun Devil seniors have voted and Todd Graham revealed the uniform combination for the Territorial Cup.

In their final game of the regular season, the Arizona State Sun Devils will continue their year-long tradition of wearing a different uniform in every game.

This week, the seniors on the football team were given the chance to vote for the uniform combination and they selected white helmets, black jerseys and black pants for the Territorial Cup game on Saturday evening.

Todd Graham announced the uniform combination on twitter on Tuesday evening and urged Sun Devil fans to come out and join what figures to be a sellout crowd in Sun Devil Stadium against the Wildcats. 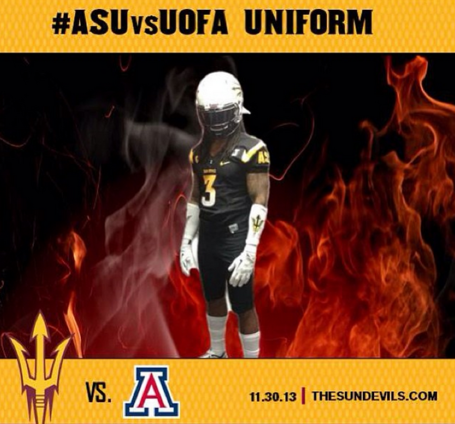 This marks the 12th different uniform combination the Arizona State will wear this season and the Sun Devil Equipment department is proud of the creativity. The @SunDevilEquip twitter has been interacting with fans and showed its satisfaction with the uniform choices this year in this collage.

Arizona State will wear the same helmets it wore in last year's bowl game against Navy that featured a black pitchfork and black facemask on the white helmet.

The @SunDevilEquip twitter account also revealed that the leader in the clubhouse was a black helmet, maroon jersey and black pants look, but the seniors had a sudden change of heart. Apparently, Will Sutton may have led the crusade for this week's combination.