The Sun Devils are going back to their roots for Saturday's game against the Stanford Cardinal.

When the Sun Devils won the Rose Bowl in 1987, Arizona State wore maroon and gold uniforms. Much has changed over the past 26 years, but the Sun Devils will go back to their traditional colors for Saturday's Pac-12 Championship game in their quest for another Rose Bowl berth.

Arizona State coach Todd Graham tweeted out a photo of the Sun Devils' uniform combination and indicated that the fans' request for maroon and gold was honored this week.

The fans asked for it, now we need the fans to show up loud and proud. G/M/G #tradition #chasingroses… http://t.co/60WhSQHUlO

This marks the first time this season that the Sun Devils will repeat a uniform combination, as Arizona State opened the season in gold helmets, maroon jerseys, and gold pants against Sacramento State. 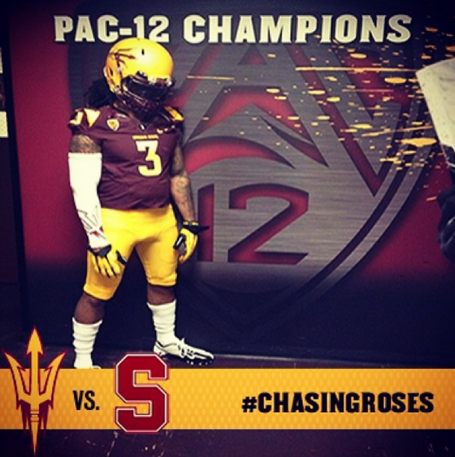 The Emblem Source tweeted out a photo of a special Pac-12 Championship game patch that will be worn on sideline apparel by both Stanford and Arizona State personnel. The patch will not be included on the teams' uniforms for Saturday's game.

Saturday also marks the sixth time that Arizona State will wear maroon jerseys this season. The @WiredDevils Twitter account pointed out that the Sun Devils are 5-0 in maroon this season.

What are your thoughts on this week's uniform combinations? Share them in the comments section below.